Can't see the tree for the wood...

One of my favourite items at the Memorial is a tall steel and iron German camouflage tree from the First World War. During the First World War fake trees were one method used for disguising observation posts on the Western Front. This tree is from Oosttaverne Wood (also sometimes spelt Oostaverne Wood), near Messines in Belgium. We don't know when the tree was erected in the wood, but it could have been used by the Germans up until 7 June 1917, when the Oosttaverne area was captured by the British during the Battle of Messines. 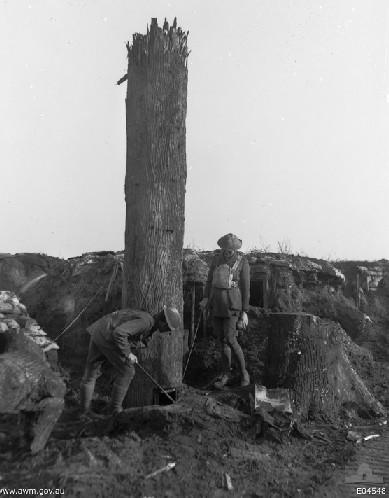 It was hidden among a group of real trees in the wood and would have been difficult to spot as a fake - especially from a distance. The exact original location of its placement in the wood is unknown, but after the Battle of Messines it remained in position in Oosttaverne Wood, behind the new British front line until January 1918, when the 3rd Battalion AIF dismantled it while they were stationed in the area. 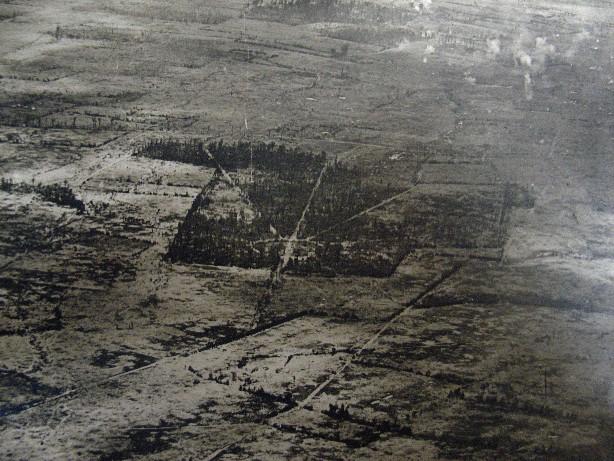 The front was carefully watched by both sides, and an extra tree appearing out of nowhere would have been noticed and targeted. For the fake tree to blend in, a real tree in the wood was carefully studied and photographed. A realistic looking replica was made in the German camouflage workshops behind the lines. One night the real tree was felled and this tree was erected in its place. This was done under the cover of artillery fire so the noise of their work would be drowned out.

The tree is made of a hollow steel tube, made of 16 sections bolted together with a layer of iron ‘bark'. The ‘bark' has been wrinkled and painted to look like genuine tree bark. When one of the founders of the Memorial, official correspondent, (and later official historian) CEW Bean originally saw it, he thought it was real.

The tree's base was sunk into the ground. It had an entrance that was concealed - if a trench was spotted leading up to the tree in aerial photographs it would be a giveaway. The German soldier would have entered at the base and climbed up a ladder, bolted to the interior of the steel tube. Near the top there is a steel ‘seat' for the soldier to sit on and three viewing holes for him to observe over no man's land towards the enemy's positions.

Conditions in the tree were cramped and it would have been very uncomfortable - just the small steel seat to sit on and the three small holes to look out of. There was no insulation or padding and it would have been freezing cold in winter and hot in summer. So that the soldier's face could not be seen by enemy observers, the viewing holes were covered with wire mesh.

I have never seen the tree fully assembled, but will have the opportunity later this year as it has been selected for inclusion in the new ‘Over the Front' exhibition, opening in Anzac Hall in late 2008.

Our conservation staff have been working hard preparing the tree for exhibition and they have found some interesting features. When the tree was originally dismantled by the 3rd Battalion, some of the men from the unit signed the tree bark. Some of the signatures are a bit difficult to read these days, but one that was noted by CEW Bean in 1918 was the signature of John Hamilton, who was awarded the Victoria Cross for his actions at Lone Pine in August 1915.

Another interesting feature of the tree is on one of the flange joints on the base. Andrew, one of the staff working on the tree, noticed that it has the steel manufacturer's name rolled into it. The manufacturer's name is Consett. The Consett Iron Company Ltd was a British iron and steel manufacturer based in the town of Consett in County Durham. Whether the steel came from pre-war importation into Belgium or Germany, or was scrounged from captured or abandoned British equipment is unknown. But someone in the German workshops may have enjoyed the idea of using British made steel against them!