Dolly Batcho: a woman of courage and conviction 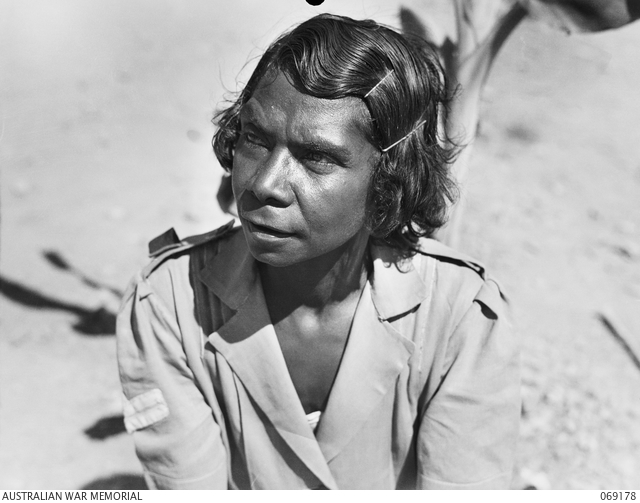 When Corporal Dolly Batcho was given a bucket of sand from Mindil Beach, she openly wept.

Dolly had left her ancestors' lands in Darwin to serve in Adelaide River during the Second World War, and was terribly homesick.

She was one of the thousands of Aboriginal and Torres Strait Islander peoples who served during the war, and her friends wanted to comfort her by collecting the bucket of sand from her home Country.

Danusha Cubillo is a researcher at the Australian War Memorial.

A proud Larrakia woman, Cubillo has been working with the Memorial’s Indigenous Liaison Officer Michael Bell to research and identify Indigenous Australians who have served or are still serving.

She was seconded to the Memorial from the Department of Defence through Defence Indigenous Affairs in 2020, to work on the Memorial’s Second World War Indigenous Service List, conducting research into Indigenous service during the war.

Dolly’s story is particularly special to her.

“Dolly Gurinyi Batcho was born in Darwin in 1905, and she is actually a cousin of my grandfather, so I guess you could call her my great-aunt,” Cubillo said.

“She is part of the Larrakia mob, and a member of the Danggalaba clan, which in our language means crocodile.

“Her family was evacuated to Adelaide during the Second World War, but she stayed behind and ended up becoming head of the Aboriginal Women’s Hygiene Unit at the 69th Australian Women’s Army Service (AWAS) Barracks in Adelaide River.

“This was a perilous place to be, and being there would have been quite scary at the time, because it was regularly bombed during the Japanese bombing raids on Darwin.

“She was representative of Aboriginal and Torres Strait Islander people who provided un-enlisted service during the Second World War.

“She worked with a lot of other Aboriginal women from the area in the hygiene squad, and they maintained the cleanliness and sanitation of that camp at Adelaide River. Most were known as privates – ancillary staff who held no military rank or authority – but Dolly was given the rank of corporal anyway because of her status as head of the unit. 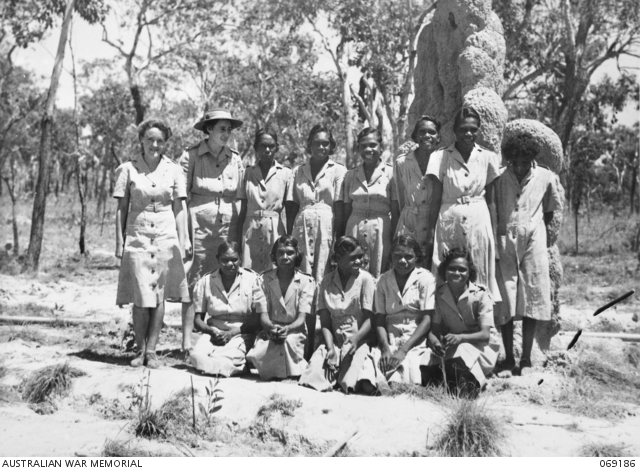 “My grandfather was there at the same time, and Dolly became really, really homesick for her Country.

“The other women noticed this, and they could see that she was becoming more and more upset about being away from home, so when they returned to Darwin for supplies, they collected a bucket of sand from Mindil Beach and brought it back to Adelaide River to give to her.

“They wanted to console her with this bucket of sand and make her feel connected to her land. It was such a generous gesture, and she wept openly when they presented her with it.”

After the war, Dolly began a new fight. Along with her husband, George Mingaloo, she spent years fighting for land rights for her people.

“She was a signatory to the Larrakia Petition, a landmark document in Aboriginal people’s struggle for recognition and land rights,” Cubillo said.

“It was to be given to Princess Margaret when she visited Government House in Darwin in 1972. More than 1,000 people, both black and white, had signed it, appealing to Queen Elizabeth to help Aboriginal people gain land rights and political representation. They felt they were refugees in the country of their ancestors, living in refugee camps – without land, without employment and without any justice.

“They waited outside Government House for 24 hours, but when they weren’t given the opportunity to present the petition to Princess Margaret, they got tired of waiting and attempted to break through the police barricade.

“Their three-metre petition was torn in the process, so they patched it up, and sticky taped it back together, and posted it to Buckingham Palace with a letter.

“The petition came back to Australia via the governor general, and has been preserved at the National Archives as part of their permanent collection since 1975, so the Queen did get to see it.”

Shortly before she died in 1973, Dolly also provided evidence to the Land Rights Commission in support of the Larrakia people's successful land rights claim. Her testimony involved visiting her ancestors’ lands at the site of the Larrakeyah Army Barracks.  The commission sought to identify the most significant tribal sites in the area, declaring them an Army Reserve.

“It was the first time she had set foot on that land in 50 years, and she openly wept,” Cubillo said.

“It had been her ancestral home … where she grew up, where she spent her days as a child, and where she would have lived before joining the hygiene service … but they had built the army barracks there and moved the people off. 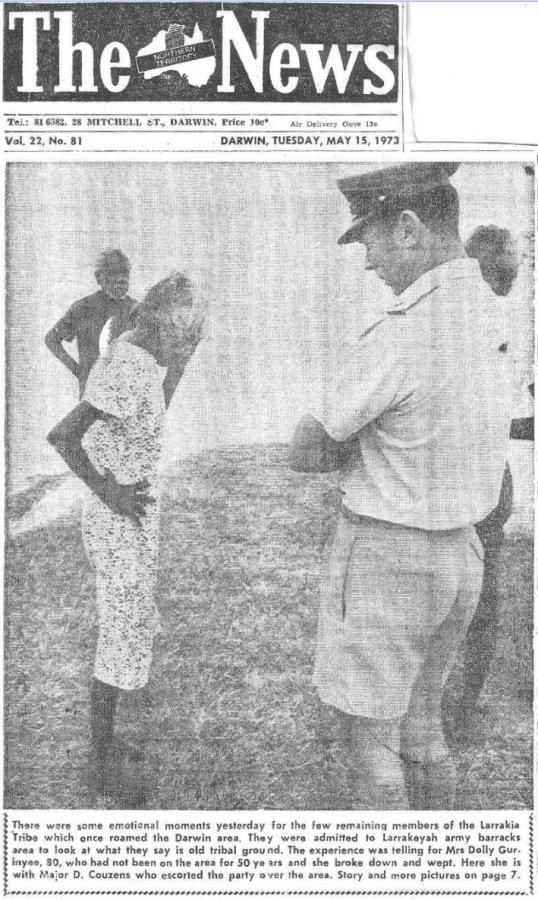 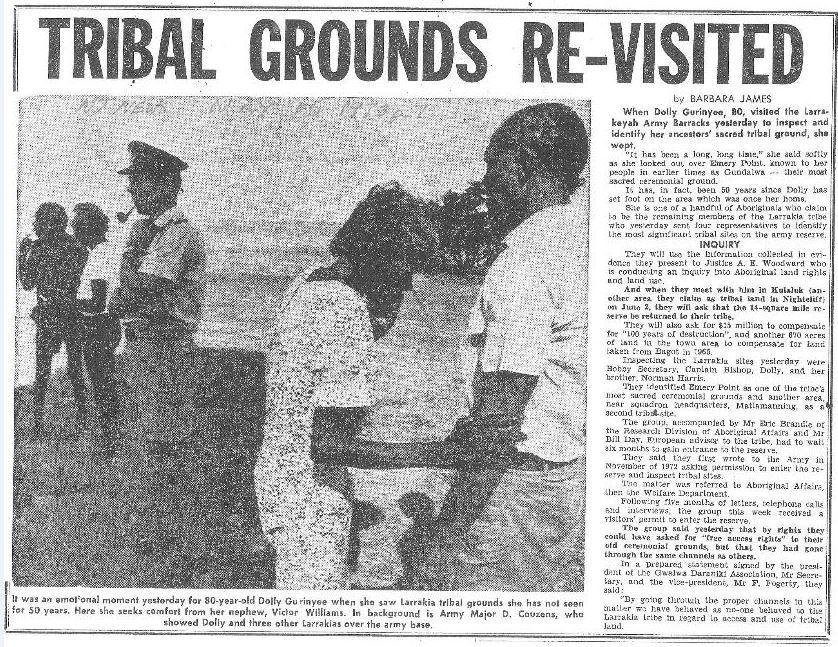 Cubillo is encouraging anyone with more information about Indigenous servicemen and servicewomen to contact the Memorial and share their stories.

“It’s about respect and giving that person their due,” she said.

“They fought for this country, and we want to acknowledge them for who they are, and be able to tell people proudly who this person was.

“Dolly was known by family and friends as a ‘wiry and cheeky’ woman and was highly respected in her community.

“She had this amazing sprit, and was so committed. She stayed behind during the war to work, when everyone else was evacuated, and joined the army service.

“She could easily have travelled to Adelaide and been evacuated as well, but she chose not to go, and I think that shows her courage and conviction.

“Her husband George would often visit the house and spend time with my grandfather, and it was Dolly’s husband who bestowed upon my grandfather his traditional name, Belyuen.

“There was a lot of men’s business and secret stuff going on, and I was there the day that it happened, the day that my grandfather was given his traditional name by Dolly’s husband.

“We need to realise that there was a time when people didn’t believe that Indigenous people served at all, in any of the defence services.

“There was a belief that there was no representation at all, and with the work that I’m doing, I’m trying to prove that not only did these people serve, but they provided quite commendable service to their country.

“Whether they were someone who flew a plane, as opposed to someone who was a carpenter, or a butcher, or a chef working in the kitchen, they were all people who provided service in defence of our country.

“If we don’t tell these stories, these people are going to be forgotten forever. And they deserve to be remembered.

“Dolly was an amazing lady, and I am proud to call her my great aunt.”

Michael Bell is a Ngunnawal/Gomeroi man and the Indigenous Liaison Officer at the Australian War Memorial. If you have information about the contributions of people of Aboriginal and Torres Strait Islander descent who have served or are currently serving in the armed forces, or who have contributed to wartime efforts, he would love to hear from you. He can be contacted at Michael.Bell@awm.gov.au.