Our Furry Recruits : Cats of War 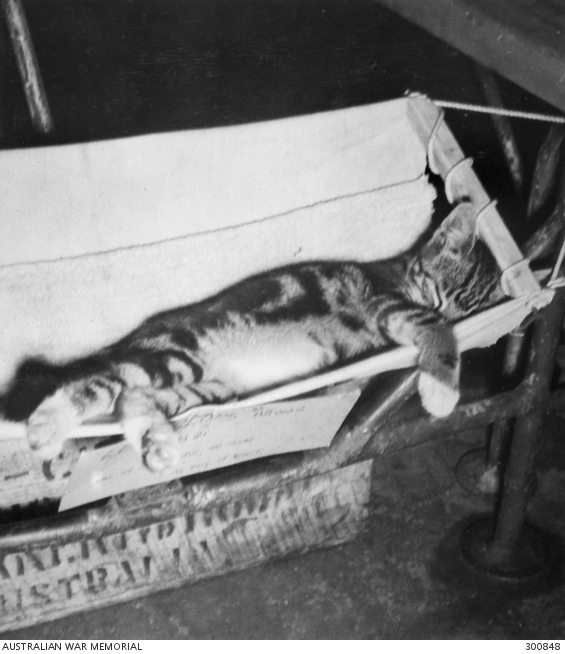 When people went to war, cats went too.

Its a little known fact that cats and even kittens accompanied men and women into the fields of battle, both at sea and on land. "War cats" had two important roles: “official mascot” for the regiment, squadron or ship; and “rat catcher”, a less glamorous, though no less essential duty.

But whether photographed as a mascot, working cat or adoptee - for often, in the field of battle, cats and kittens were adopted by troops - cats have performed another essential role:  raising morale.  With their amusing and affectionate behaviour, they helped remind men and women far from Australia of "normal" life, and the comforts of home.   The British experience was very similar. As one of the curators of the Imperial War Museum recently said:

“It was probably something to do with holding on to a bit of normality... offering a bit of innocence in contrast to the horror around them. Because the one thing they couldn’t blame for everything bad that was happening around them was an animal.” (Paul Cornish, IWM)

In common with our sailors, soldiers, nurses and airmen, many a cute kitty has had its portrait taken.  Enjoy this selection of photographs from the Memorial’s collection, showing cats at war.

Its thought that the tradition of cats aboard ship arose as far back as ancient Egyptian times, when early mariners saw the usefulness of having a rat and mouse catcher aboard to protect their on board food stores.  By the time of the First World War, cats, in common with other animals, were often mascots of not only ships but infantry regiments and Air Force squadrons. Incidentally, British Admiralty records apparently show significant expenditure for the annual maintenance of cats aboard ship to keep rat numbers down.  The practice of providing cat –sized hammocks probably originated with the British navy.

Cats have a natural tendency to attach themselves to a place, space or territory and were therefore better suited to ship board life, or as a mascot to an air force base, than to an army regiment likely to be on the move.  Even so, many of the Memorial's photographs of cats were taken with infantry and other land based units.

A naval cat would typically begin as the pet or mascot of one area of a ship, such as the engine room, before finally becoming the official mascot of the whole ship. Some ships, as the Memorial's collection shows, had more than one cat, and sometimes the ship’s cat had kittens at sea.

It was thought to be bad luck for the ship’s cat to leave the ship, and indeed there is an Australian story of a straying cat whose ship went down. This is the story of Red Lead, the black kitten mascot of  HMAS Perth.

In January 1942, HMAS Perth, with a crew of over 600 men, was tasked with preventing the Japanese advance across south-east Asia.  En route they stopped at Fremantle, where, it is thought, little Red Lead joined the ship. His favourite spot was curled up in the cabin of Hec Waller, the ship’s captain.

On 27 February, HMAS Perth joined a fleet of British, Dutch and American ships to stop a Japanese naval convoy from landing on the island of Java. The allied fleet was outnumbered; its ships were picked off by Japanese planes and the heat of battle sent Red Lead to hide in his favorite place till Perth withdrew, and returned to safe harbour.  It is reported that while at harbour, Red Lead tried to leave the ship, no less than three times. But in each instance he was spotted “deserting” , was intercepted, and returned to his post.   The ship’s log for the day read :

"Red Lead, ship's kitten, endeavoured to desert, but was brought back on board, despite vigorous protests."

Several of Perth’s crew observed this and were dismayed, seeing Red Lead’s escape attempts as a bad omen for their future.

Very sadly, Red Lead’s instinct was proven. The next day, HMAS Perth and USS Houston sailed for the south coast of Java and met a large fleet of Japanese ships. After a desperate battle, the Perth was sunk. Over 350 men, including Captain Waller, and one little black kitten, were lost.

A is for animals : an A to Z of animals in war  a book published by the Memorial to accompany its 2008 exhibition A is for Animals.

Animals in War by Jilly Cooper

The animals' war: animals in wartime from the First World War to the present day
by Juliet Gardiner