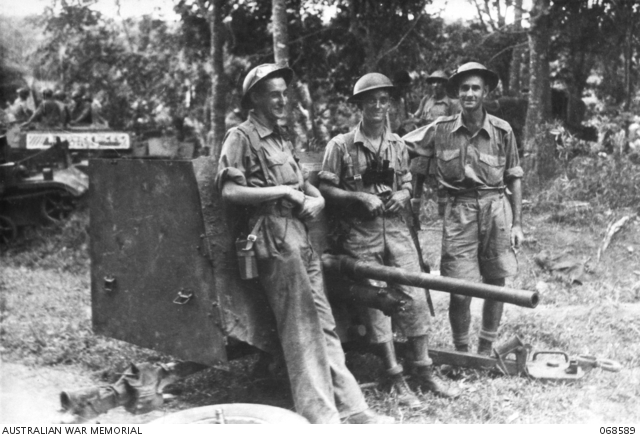 A two pounder Anti-Tank Gun of the 4th Anti-Tank Regiment, 8th Australian Division, AIF, directed by VX38874 Sergeant (Sgt) Charles James Parsons, of Moonee Ponds, Vic (centre), with two crew members, identified as VX56083 Gunner (Gnr) Lenard Edward Coutts and Gnr Ken Daniels, standing against their Anti-Tank Gun in a clearing near the road block at Bakri on the Muar-Parit Sulong Road. The Anti-Tank Gun was known as the rear gun because of its position in the defence layout of the area. Sgt Parsons was later awarded the Distinguished Conduct Medal (DCM) for his and his crew's part in destroying six of the nine Japanese tanks during this engagement. This photograph also appears as negative no 011309.