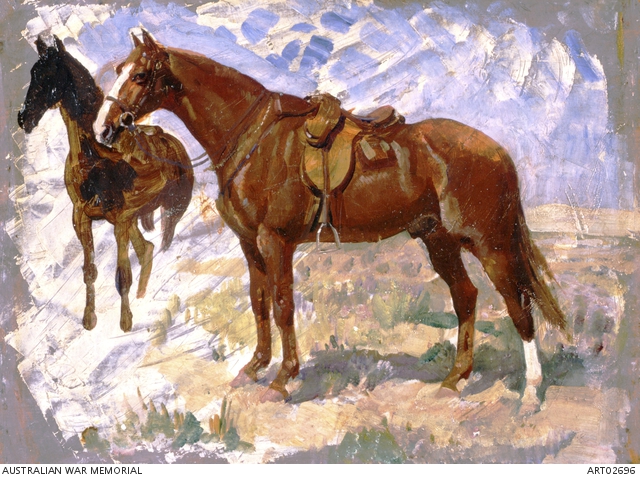 An unfinished oil sketch, depicting two horses standing on a grassy plain under a blue sky. In the foreground, a chestnut horse stands in profile and looks out of the corners of its eyes toward the viewer. This horse has a white streak down the face, a white near hind foot and wears an officer's saddle with wallets, shoeing case, and non-Army issue bridle with snaffle bit, but no headstall. The horse to the far left, also chestnut, is less finished and stands on an angle more to the front. This is Rainbow, the troop horse ridden by Lieutenant Colonel Michael Bruxner.

It is likely that this oil sketch was made around the same time that Lambert drew Bruxner's portrait on 14 February 1918 (AWM ART02790). When Lambert visited the Anzac Mounted Division at Richon le Zion, Bruxner was DAAG and responsible for looking after Lambert. Bruxner wrote: "... what appealed to us more than anything was his knowledge of horses. A magnificent horseman himself, he was at home among the best riders of Australia and New Zealand, and no one ever objected to lending his charger to our quest ... The first day he went out I lent him a little bay of my own, and my groom, Farley, rode another stout black that I had taken with me from Australia. On their return George got pencil and paper, and over a cool drink leisurely drew a horse's nose and nostrils, then pushing it towards me said: 'Do you know that nose?' There was something familiar about it to me, but the nostril was of peculiar shape and I drew his attention to it, saying: 'Only for that it would belong to my black pony'. He replied that it did and after argument we went to the lines and looked; he won although I had been with that pony every day almost since 1914." (M.F. Bruxner, George Lambert at the Front' in Lambert 1924, p. 27).

George Lambert was an Official War Artist during the First World War. He was stationed in the Middle East between 13 January 1918 to June 1918, and with Bean on the Historical Mission to Gallipoli from February to March in 1919. He later revisited Palestine. Lambert worked on Australian War Memorial commissions during the 1920s.