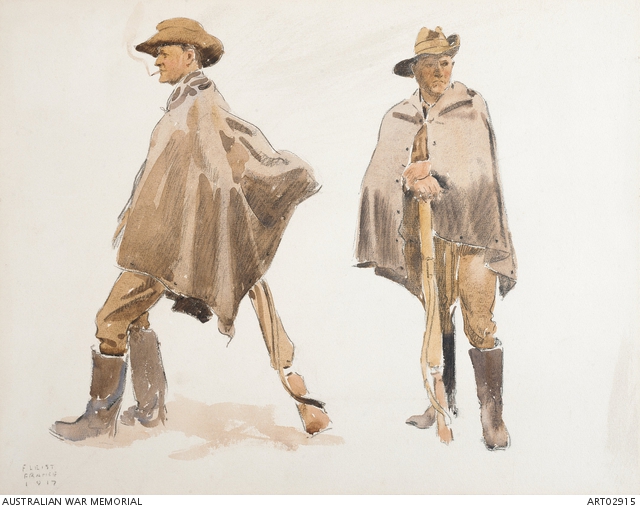 Watercolour sketch depicting two Australian soldiers. One soldier is facing the viewer, the other is a side view leaning on his rifle with a cigarette in his mouth, illustrating their wet weather kit: slouch hat, waterproof cape-groundsheet over tunic haversack and trousers, and gum boots. Frederick Leist was a painter, illustrator and teacher. He studied at the Sydney Art School and the Art School of New South Wales from c.1894-95. During the 1890s he worked as an illustrator for the 'Bulletin' and 'Sydney Mail' and trained as a furniture designer with the David Jones department store. In 1908 he went to England and became an artist with the London 'Graphic' while exhibiting his art work at the Royal Academy in 1911. He worked for the British War Office between 1915 and 1916 and worked for His Majesty's Stationary Office designing posters for First World War recruitment. Leist was appointed an official war artist in September 1917, attached to the 5th Division AIF and worked twice in France between September to December 1917 and from June to August 1918. His commission was terminated in 1920.