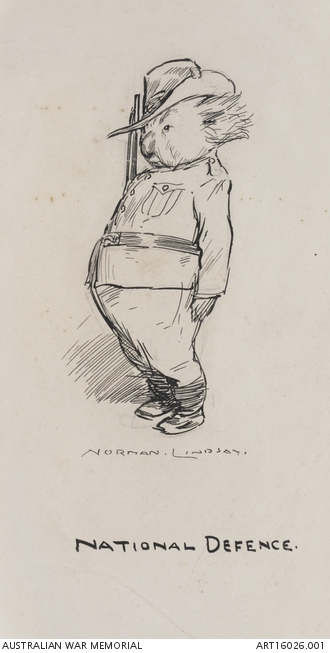 Depicts a koala bear in an Australian army uniform including a slouch hat and rifle. The text below the image that reads 'National Defence' and was created in the lead up to the First World War.

Norman Lindsay was born at Creswick, Victoria in 1879. As a child Lindsay was confined to the indoors due to a blood disorder. To keep himself occupied he taught himself to draw by copying illustrations from periodicals and by drawing about the home from life. Later working for the Bulletin, Lindsay often depicted the activities of a koala bear who was commonly known to readers as Billy Bluegum. Over two tumultuous decades, Billy's adventures reflected the social and political turmoil of a country suffering the birth pains of nationhood and later plunging into the First World War.

Later Billy Bluegum became one of the leading protagonist in 'The Magic Pudding', a well known children's classic both written and illustrated by the Lindsay in 1918.