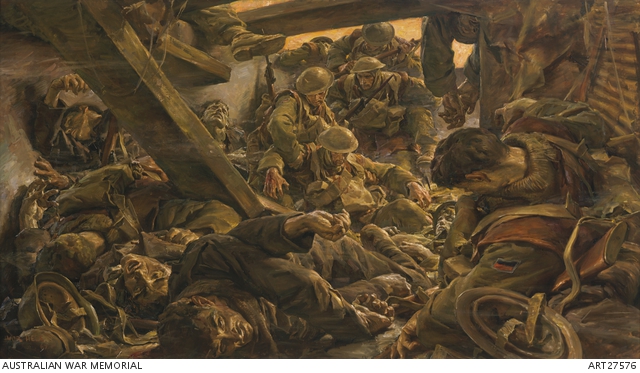 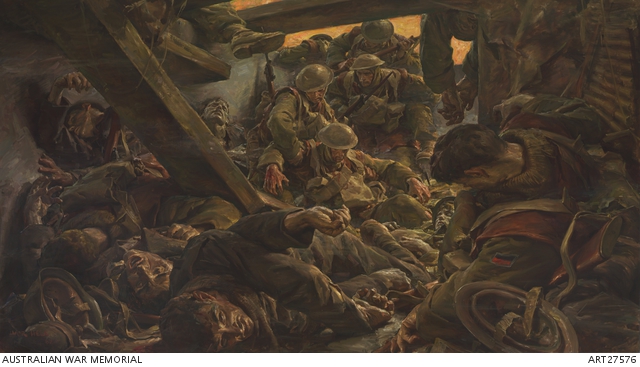 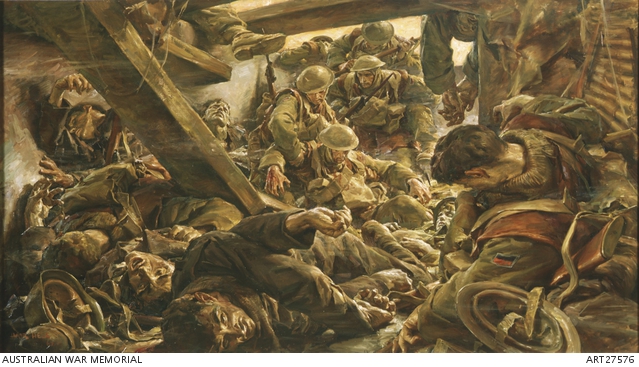 VX3511 Sergeant H B S 'Jo' Gullett, VX3495 V N Maloney, VX3497 Private H F Brockley, QX3118 Private F C Damm, all of 2/6th Btn 2 AIF, unidentified Australian and Italian soldiers. The first major campaign of the Second World War in which the Australians fought was against the Italians in Libya. Hele did not witness the important battle which led to the capture of Bardia, although he did travel to the area in 1941 and made various studies of the town. Commissioned by the Memorial twenty-five years after the event, Hele based his painting on material and information provided by one of the survivors, Henry Baynton Somer 'Jo' Gullett, shown as the figure in the centre of the composition being dragged from amongst the bodies. Unlike most of his large, panoramic battle paintings, Hele has painted the event at close range. The choice of a confined perspective on a large scale gives the work a cinematic quality. The fallen bodies in the immediate foreground echo the dramatic effects of baroque art. The subject is an episode in the fighting between the Australian 2/6th Battalion and the centre of Italian resistance at Post 11. Colonel Godfrey, commanding officer of 2/6th Battalion, had written that this stronghold could 'defy capture if manned by Australian troops.' While the garrison at Post 11 was the last to fall in the battle which lasted from 3 to 5 January 1941, the point in the action painted by Hele occurred in the first few hours. Hele wrote: 'I have taken the incident where Brockley is lifting Joe [sic] to his feet, with Bernie Damm carrying his brother + Maloney keeping the enemy heads down in the background, with Cpl Latham dead near Joe's [sic] feet.'