Study for 'These laid the world away...' 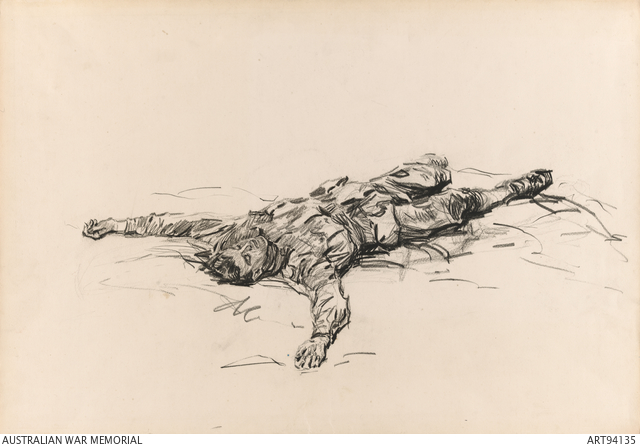 "Study for 'These Laid the World Away...'" is a figure study for a large sombre oil painting of a First World War battlefield still bearing the uncollected casualties of war - fallen Australian soldiers - the sketch featuring only the foreground figure lying prone on his back. The painting's full title: 'These laid the world away; poured out the red Sweet wine of youth; gave up the years to be of work and joy, and that unhoped serene, That men call age' is drawn from a Rupert Brook sonnet, 'Death', the third in a series of five sonnets, called 'The Dead'.
Rix Nicholas was often criticised for not employing a more feminine technique with her art. This study is a good example of her strong and vigorous style; her confident and gestural marks are indicative of good draughtsmanship. The sketch shows only the prostrated figure with a few strokes to suggest the landscape in which he is lain.
The painting was first exhibited in 1922 at The Fine Art Society's Gallery in Melbourne.