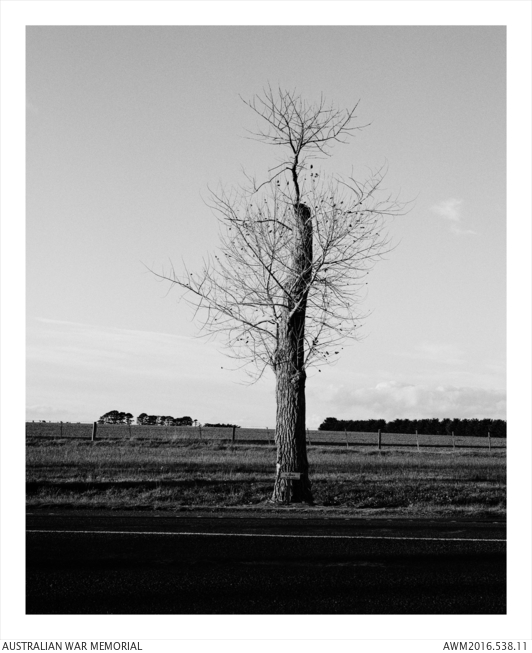 Photograph of the tree planted on the Avenue of Honour, Ballarat, Victoria, in recognition of the service of 2935 Private George David Charles Jones, 51st Battalion. This photograph is from a series of 22 images taken by Trent Parke titled WW1 Avenue of Honour.

Artist's original caption: Private George David Charles Jones 2935
51st Battalion A.I.F.
Enlisted: Aged 37 years and 11 months: 10th July 1916
26.09.17 Last known contact: all letters stop, all trace of him lost
04.05.18 Reported missing in Action, Belgium
20.06.18 Court of Enquiry reported: Killed in action (26.09.17) France “I have just heard further about one of my old ‘cobbers’, Charlie Jones. We were going up together on the September 26 th stunt and when we got just about on the Blue line he sprained his ankle and by what I can hear has never been heard of since. One of our fellows told me that he was going back with some prisoners to help out when a shell came over and killed two prisoners as well as poor old jones.... He gave me his wife’s address before we went into that stunt in case anything happened to him.. so I want you mother, to go out and see Mrs. Jones and tell her what I have written, first of all. She was to find out if there has been any word from the military about him, and if he is marked ‘missing’. Tell the poor woman not to hold out any hopes of him, if it so, because he could not get over into Fritz’s lines from where I left him. The only thing that I think happened to him was, that the shell must have landed right on top of him and blown him to pieces.”
Extract of a letter written from Private George Martin 2963, 51st Battalion, to his mother. Inquiry Office, Base Records, Melbourne Victoria, 5th April 1918/National Archives of Australia
“Dear Sir, I write you in reference to my husband, Private George D C Jones. Up to last September 1917, I received my husbands letters regularly every mail also his mother received a letter from him every mail, my last letter received from my husband was dated 27th September 1917, Since receiving that letter I had no word whatever, his Company Mate 2963 Private George Martin 51st Battalion has stated in a letter to his wife he saw my husband crawl out of a shell hole but he was unable to walk so he just said good bye and had to advance and leave my husband lying there, that was somewhere in France.. I have done everything possible to get some news of my Husband but the military cannot find any traces of my husband. I feel you will do all you can to help me in this, my great trouble, trusting I am not asking too much of you
Believe me yours Sincerely Annie J Jones”
Copy of letter in Australian War Memorial Archives, dated 21.03.18

This is the second of two photographs of the tree planted to commemorate Private George Jones, 51st Battalion.