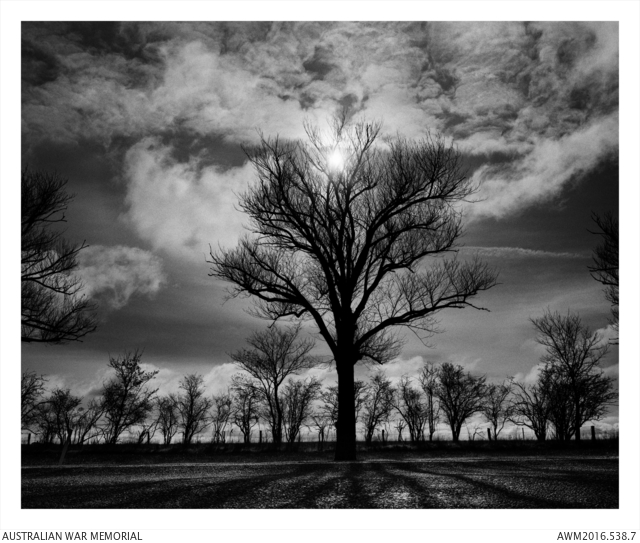 Photograph of the tree planted on the Avenue of Honour, Ballarat, Victoria, in recognition of the service of 2122 Gunner Leonard Joseph Willis, 3rd Field Artillery Brigade. This photograph is from a series of 22 images taken by Trent Parke titled WW1 Avenue of Honour.

Artist's original caption: Gunner Leonard Joseph Willis 2122
3rd Field Artillery Brigade A.I.F.
Enlisted: Aged 26 years 8 months: 25th November 1916 (D/W 29th March 1918)
“At Wychette Ridge Willis was gassed by a shell and died at the D/S. He was going up into a dug out at the time and the one shell killed 13 and wounded 9. I saw his body lying dead. I cannot give details of burial, but he would probably be buried in the cemetery 200 yards away from the D/S. Willis used to belong to the 8th Bn. and originally came over with the 13th L.H. He was 5ft. 8 or 9. He used to live at Ballarat and he was employed at the sunrise harvesting Co.”
Reference: Gnr G.C.Cecil, 2061. 9th Bty. A.F.A.
No 11 Con. Camp Buchy Nr Rouen. 19.9.18/Australian War Memorial Archives
“I did not know Willis very well, but do know that he was gassed and left the Bn. On good Friday at about 4.30pm at the same time as Felan who had also been gassed. They were sent to Clark’s Dump near Wytscheate. Willis and Felan died there and were buried at Vermiceille. I have not see the grave. H.Q. ought to have details.”
Reference: Gnr.W.H.StaHard, 27307. 8 Bty.
No.11 Con. Camp Buchy Nr. Rouen. 31.7.18/Australian War Memorial Archives