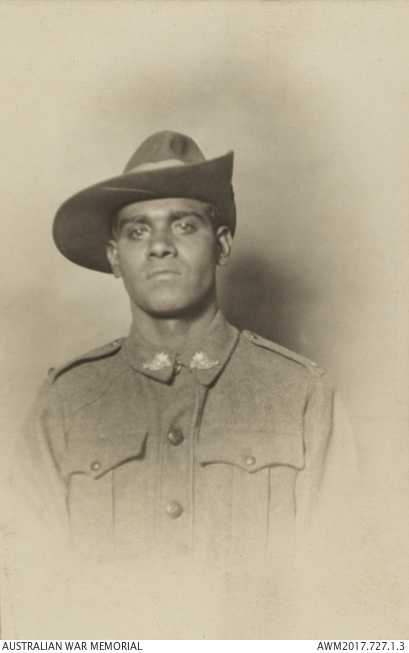 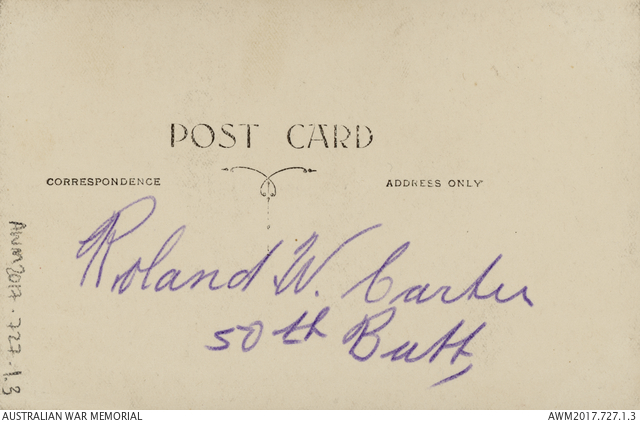 Studio portrait of 3027 Private (Pte) Roland Winzel Carter, 10th Reinforcements, 10th Battalion, later 50th Battalion. An Aboriginal Seviceman of Point McLeay, South Australia, Pte Carter was wounded and captured at Noreuil on 2 April 1917 and held as a Prisoner of War at Zerbst and later at Wuensdorff-Zossen at the Halbmondlager POW camp. This camp was primarily for Moslem prisoners of war and later included people of different cultural and religious backgrounds and included two Indigenous Australian POWs Roland Carter and Douglas Grant. Carter was repatriated back to Australia and discharged 12 June 1919. Image from the collection of 3069 Pte David George Horwood, 10th Battalion, later 50th Battalion. A labourer of Broken Hill, New South Wales, prior to enlistment, he embarked with the 10th Reinforcements, 10th Battalion on 14 September 1915 aboard HMAT Ballarat A70. In February 1916 he was posted to the 50th Battalion. In August 1916 he was promoted Lance Corporal then in January 1917 to Corporal. On 2 April 1917 he was wounded at Noreuil and taken prisoner of war (POW) by the Germans, held initially at Valenciennes then Munster before ending up at Soltau POW camp. He was repatriated to England on 31 December 1918 and returned to Australia for discharge on 12 June 1919.