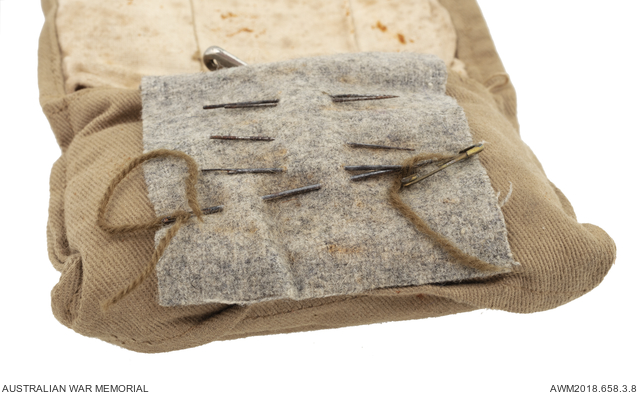 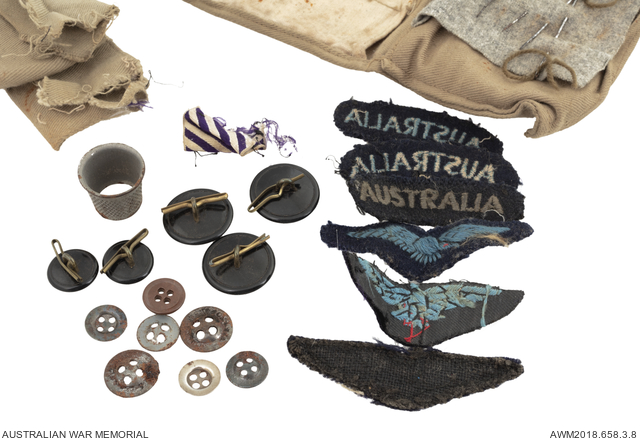 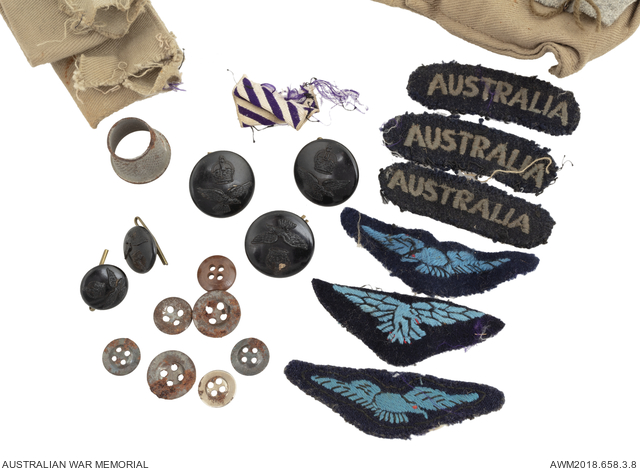 Khahki cotton drill roll-up sewing kit, or housewife, which contains a grey cloth swatch with an assortment of five needles and two safety pins. Inside the roll is a length of white cotton sewn into columns. Each column holds a skein of spare wool and RAAF braid. Tucked into a pocket at the bottom of the roll are spare RAAF buttons, cotton thread, spare cloth Air Force insignia, Australia titles and DFC ribbon, and a metal thimble. The number '409993' is written inside the roll. When rolled the housewife is held shut with two lengths of khaki cotton tape.

Housewife belonging to Flying Officer TT Hall. Thomas Taylor Hall was born in Port Melbourne on 21 May 1921. He left school at fourteen after receiving his Intermediate Certificate and commenced work at the Meteorological Bureau. Volunteering for aircrew, Hall was enlisted as 409993 and placed in the RAAF Reserve while he attended night school to further his studies in trigonometry, maths and physics.

Receiving his wings as a pilot in December 1942, Hall was posted to 1 Embarkation Depot, Ascot Vale on 6 January 1943 for service in the United Kingdom. He embarked from Port Melbourne aboard the Stirling Castle on 6 March arriving in Liverpool via America and Canada on 16 April.

Joining 175 Squadron RAF on 27 May 1944 Hall participated in the unit’s first operation on D-Day (6 June), a three section (twelve aircraft) attack on heavy gun positions near Cabourg in France. Hall was the last of the twelve aircraft to attack and after successfully firing his rockets returned to 175 Squadron’s base at RAF Stoney Cross. On landing Hall discovered a 20mm shell had gone through his fuselage just behind where his head was before leaving a large exit hole.

On 17 September 175 Squadron moved to Antwerp, Belgium. Five days later Hall took part in an armed reconnaissance of the Uden- Veghel area of the Netherlands. On landing back at Antwerp, 175 Squadron aircraft were subjected to attack by a Me262.. Having no time to collect their parachutes or flying gear, Hall and the other aircrew ran to the slit trenches for cover. Hall’s aircraft – HHT received a direct hit and caught fire. The RP-3 rockets that were still attached beneath the wings of HHT took off. One hit a refreshment van on the other side of the aerodrome and killed five people who were getting a cup of tea.

Hall remained with 175 Squadron until March 1945 when he was transferred to 83 Group Service Unit. During his tour Hall flew more than 120 operations and was awarded the Distinguished Flying Cross for his courage and initiative on the large number of operational sorties he undertook.