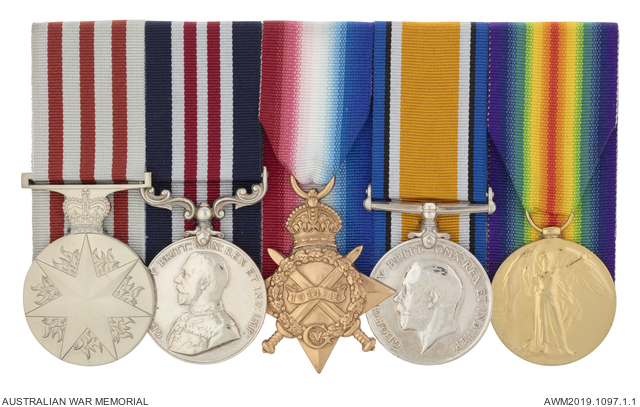 Thomas Francis 'Frank' Cahir was born on 23 September 1889 at Yendon, Victoria. He studied pharmacy at university before he enlisted in the AIF on 18 August 1914 under the name Frank Carr. After initial training he posted a private, service number 63, to the 2nd Australian Field Ambulance in 1914. He embarked for overseas service from Melbourne on 19 October, aboard HMAT A18 Wiltshire. After further training in Egypt Carr landed with his unit at Gallipoli on 25 April 1915. In 1916 he was awarded a retrospective Military Medal for his actions in the first month of the campaign. Later in 1915, Carr, by now a staff sergeant, was evacuated sick to Lemnos and then on to Egypt. He returned to Gallipoli in October, where he joined 3rd Field Ambulance.

In France from 1916 onwards, Carr served with the 3rd, 2nd, 10th and 9th Field Ambulances, treating wounded and sick men through some of the most costly battles faced by Australians at the Somme in 1916, in Belgium in 1917, and at Villers-Bretonneux in France in 1918. For his actions near Bray in August and September 1918, Carr was recommended for the Distinguished Conduct Medal. The recommendation for the award, which was not approved, reads: ' On the 23rd August, 1918, in the neighbourhood of BRAY (Sheet 62D. K.18.a) between 5 a.m. and 7 a.m. this N.C.O. four times made his way along a half a mile of valley through a heavy concentration of gas, and in the face of fierce and continuous shelling to deliver dressings to a Regimental Aid Post./ During the fighting east of BRAY, from August 22nd to September 1st, his continuous devotion to duty and organising ability, coupled with great coolness and determination under fire, were a large factor in the difficult task of keeping touch with moving R.A.P.s, thus rendering possible the quick evacuation of casualties./ From the end of March 1918 until the present date, he has been constantly employed in the forward areas, in the organisation and supervision of the evacuation of the wounded./ In the many days of bitter fighting during this period, he displayed a contempt for danger, energy and initiative of a very high order. In the weeks of arduous trench warfare he set an example of endurance, cheerfulness, and soldierly qualities that stimulated all ranks./ This N.C.O. joined the 9th Field Ambulance on 4/2/18 bring with him a Military Medal and a fine record of painstaking work during seven months on GALLIPOLI and 2 years in FRANCE.' The recommendation for the award was also supported by the commanding officer of the 10th Field ambulance who wrote: 'I desire to place on record the excellent work of Staff Sergeant CARR of your Unit during the end of August and beginning of September. This N.C.O.s devotion to duty and organising ability and endurance were a large factor in keeping touch with the R.A.P.s which was no easy matter during the recent advance. His cheerfulness and soldierly bearing under most trying and exhausting circumstances merited the highest praise'. An annotation beside the recommendation reads 'Should have been put up for bar to MM [Military Medal]'.

Apart from a short period in England at the end of 1916, when he was recovering from a dislocated shoulder, Carr had few breaks from service during the war. He took extended leave in Britain at the beginning of 1919, but instead of returning to Australia decided to volunteer for service with the Australian War Graves Detachment. Carr served with this unit until 1921. His work included making photographic records of grave sites for families in Australia who would never have the opportunity to visit the final resting place of their loved one. Returning to Australia by ship in 1921 he met an Irish woman, Mabel, whom he married, and had three sons – Patrick (Pat), Vincent and Jim. Cahir resumed his work as a pharmacist but like so many of his generation struggled to reconcile his experiences in a society that had little understanding of the psychological impact of war. He committed suicide on 22 May 1928. Writing to the War Records section in 1967 his wife Mabel stated: 'He died of war injuries'.

Although their father’s First World War Service had a tragic impact on the family, all three of Cahir’s sons enlisted to fight in the Second World War. Pat joined the army and served in the Pacific theatre, Jim served with Bomber Command and was taken prisoner of war, and Vincent served in the Navy. All three brothers returned home safely. In 2011, soon after the National Archives of Australia digitised their First World War service records, the brothers found that their father had been recommended for a bravery award which he had not received. Their persistent petitioning of the Australian government to right what they felt was a wrong resulted in the posthumous award of the Australian Distinguished Service Medal to Frank Cahir. In 2017, aged ninety-two, Pat Cahir was presented with the medal by the Governor of Victoria, Linda Dessau. Though his two brothers did not live to see the presentation of the medal, Pat described receiving it as 'the family miracle'.