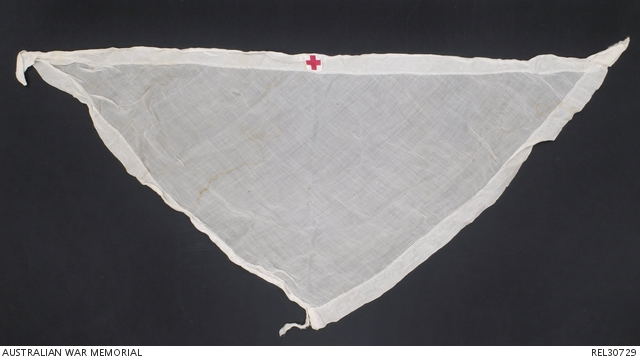 Triangular white organdie muslin veil with spoke stitching along each hem. A small woven Red Cross badge is stitched to the front of the brow band. Sewn on the underside of the band is a white tape with the name 'NANCY EGLINTON' enbroidered in red.

This veil, or 'cap', was worn by members of the VAD and AAMWS with the indoor uniform.The point was to be worn down the nape and the two ends tied over it in a double knot.Worn by SFX15101 Private Nancy Stewart Eglinton. Eglinton was born in Adelaide, South Australia in January 1918 and enlisted in the Voluntary Aid Detachment on 10 November 1941. In 1942 Eglinton, with the majority of VADs, was transferred to the newly formed Australian Army Medical Women's Service. During the war she served in Northern Queensland, and possibly in New Guinea towards the end of the war. She served with 128 Australian General Hospital (AGH), 2/6 AGH and when discharged on 26 April 1946 she was serving with 101 AGH, based in Northfield, Adelaide. At the end of war she met and later married S3509 Colin Malcolm McEachern, a telegraphist from the Royal Australian Navy who served as a coast watcher during the war. He was awarded the Distinguished Service Medal during his service in HMAS Parkes.