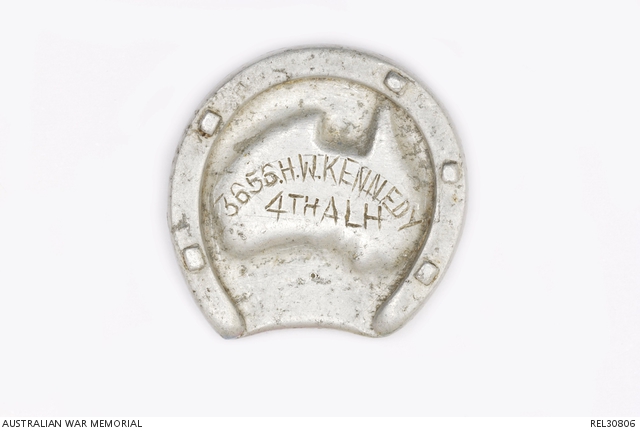 Hand made aluminium identity disc. The disc is manufactured from three layers of aluminium, the topmost being a small horseshoe, the five 'nails' of which fasten the layers together. Within the horseshoe, the second layer shows a relief map of Australia, in which are hand engraved the words '3656. H.W.KENNEDY 4TH ALH'. The bottom layer of aluminium has been shaped to form a cavity, presumably intended to retain a leather wrist strap for the tag.

Worn by 3656 Trooper Harold William Kennedy, 4 Australian Light Horse Regiment. Harry Kennedy, a grocer's assistant from Buninyong in Victoria, enlisted in the AIF in May 1917, at the age of 19. He sailed with the 28th Reinforcements to 4 Light Horse Regiment aboard HMAT A.55 'Kyarra', and served with the regiment until the end of the war, returning to Australia in June 1919. He died in November 1969.