Peace loan watch for the aeroplane 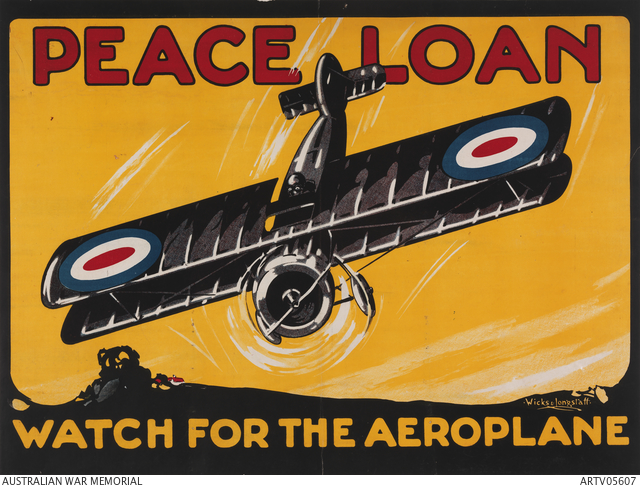 Depicts a generic British biplane swooping towards the ground as the pilot's eyes bulge madly behind his goggles. The wings of the plane are decorated with British roundels - Australia did not have it's own airforce until after the close of the war. The black aeroplane is set against a yellow background, as is a small silhouetted homestead, which is situated in the lower left corner. The title runs across the top and bottom of the poster and is printed in red or yellow ink. An irregular curvilinear border frames the whole.

The exuberance of this poster reflects the excitement generated by the first and second Peace Loan campaigns which used novel methods to raise awareness of the loans. The first was a 'War Trophies' train, which travelled throughout the country enlisting loans. The second was to have aeroplanes visit different locations, and also perform aerial acrobatics. Melbourne newspaper 'The Argus' reported on 24 August 1920 that 'Remarkable success follows the tour of the aeroplanes and the war trophies train in the country districts. Both the aeroplanes and the train have now passed the £250,000 mark.'