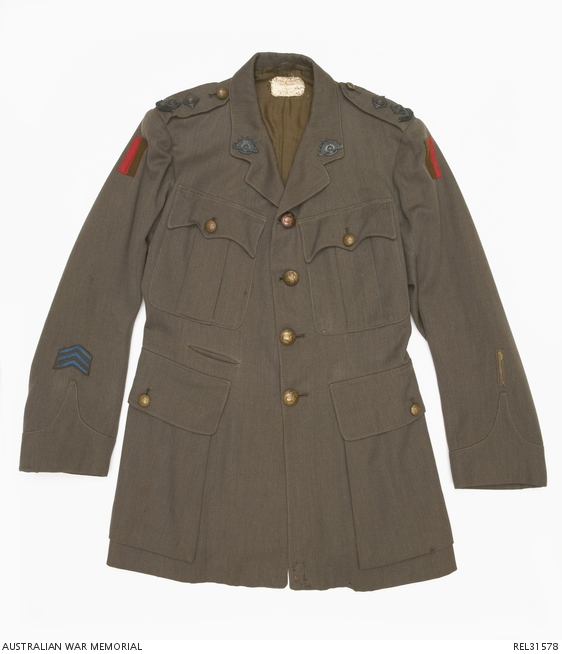 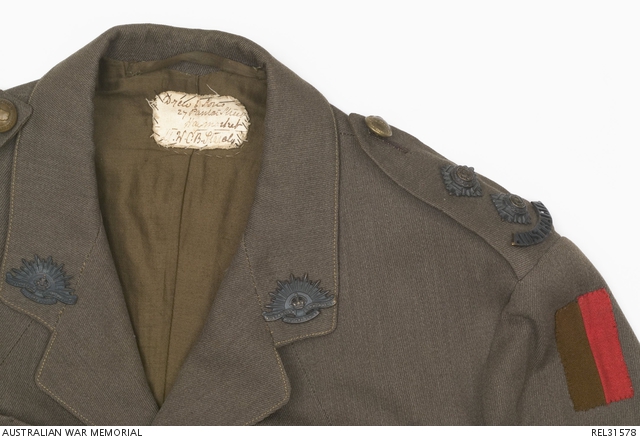 Officer's khaki wool service dress jacket lined with khaki polished cotton. The jacket has pleated breast pockets with triple pointed flaps and a pair of expanding pockets over each hip with straight flaps. Oxidised brass Australia Military Force buttons fasten the front of the jacket, and secure the pockets and shoulder straps. The jacket bears oxidised brass 'AUSTRALIA' titles and rank insignia for lieutenant on each shoulder strap and oxidised brass 'Rising Sun' collar badges on each lapel. There is a vertically aligned, brown and red, rectangular colour patch for 59 Battalion, AIF sewn to each upper sleeve. The lower right sleeve bears three blue embroidered overseas service chevrons. An embroidered yellow wound stripe is sewn on the lower left sleeve. Brass belt retainers are fitted on each side seam. There is a small pocket on the inside of the jacket corresponding to the left breast pocket. A white label has been sewn to the inside of this pocket of the pocket and is marked in black ink with 'DREW & SONS 27 PANTON ST. HAYMARKET LT. W.C. STAVELEY'. A small change pocket lined with brown polished cotton is set behind the right waist pocket. There is a white cotton tag sewn inside the back of the collar with the maker's details and the name 'Lt. W.C.B. STAVELY' handwritten in black ink.

Worn by Lieutenant William Charles Beresford Stavely who served in 59 Battalion, AIF during the First World War. Stavely was born in Victoria in 1894 and worked for the local council at Avoca until his enlistment, on 11 February 1916. Allocated the service number 2253, he completed initial training at Broadmeadows and later on the Salisbury Plains in England, before his battalion moved to France. After service there Stavely he was sent to Balliol College, Oxford where he underwent officer training. He was commissioned as a Lieutenant on 17 May 1918 and returned to his battalion in France. He took part in the Battle of Hamel, taking over command of a company when Lieutenant Facey was killed. Stavely was gassed later in 1918 and saw no further active service. He returned to Australia on 5 February, 1919 and was discharged 15 March 1919.