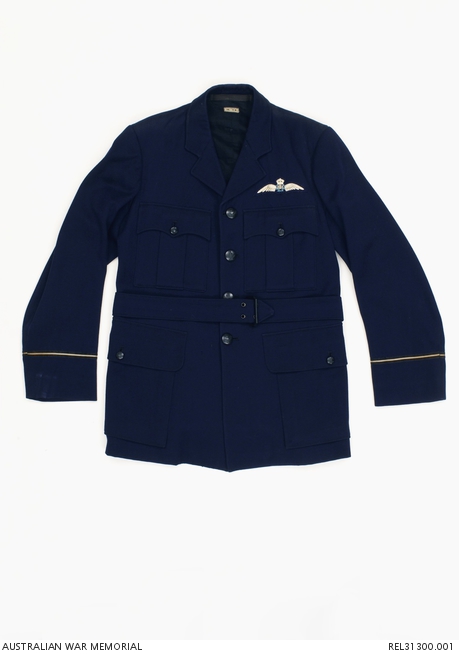 RAAF blue woollen winter service dress tunic with a pair of pleated breast patch pockets and a pair of expanding patch waist pockets. The breast pockets have three pointed flaps, while those at the waist are square. All are secured by black plastic RAAF buttons. A small inset pocket is located above the right waist pocket. The tunic is closed by four large black plastic buttons, and is belted at the waist. The self fabric belt has a broken black plastic buckle with two metal claws and four metal eyelets. A makers label below the inside collar reads ‘M. TX’. The rank rings of a pilot officer are on the lower sleeves of the tunic, and a pair of machine embroidered RAAF pilot's wings on the left breast.

Associated with the service of 129885 Flying Officer Clement John Peter (‘Peter’) Hemery, born on 26 April 1913 in Hobart, Tasmania. Before the war Hemery trained with hospital architects Stephenson and Turner, but later turned to radio broadcasting, becoming involved in special commentaries and dramatic work. He was working for the Australian Broadcasting Corporation (ABC) and Argus Broadcasting Services in Melbourne before being appointed ABC War Correspondent with the Australian Army in February 1942 and given the service number VX72930. He was attached to a Mobile Broadcasting Unit and was at first posted to Malaya, but found himself in Darwin at the time of the first Japanese attacks on the city. Hemery spent some time there doing interviews and submitting accounts of his experiences, but was frustrated by the censorship of his reports denying the Australian public the full story. In 1943 Hemery was working in New Guinea, where he covered the Pacific campaigns for the ABC as well as the British Broadcasting Corporation (BBC) and the International News Service of America (INS). He also wrote articles for newspapers such as the New York Daily Mirror, San Francisco Examiner, Toronto Star and the London Times. In 1944 he returned to Australia, and on 14 August enlisted in the Royal Australian Air Force where he was appointed Public Relations Officer. He was granted a commission on 7 October as a pilot officer. Hemery continued to cover the war in the Pacific and in March 1945 was awarded the Asiatic - Pacific Service Ribbon by General Douglas MacArthur for his long and meritorious service in the South West Pacific area with United States troops. In 1945, soon after an American bomber had dropped the atomic bomb on Hiroshima, Hemery flew over Japan in a Boeing B29 Superfortress as part of a United States bombing raid on Tokyo. He relayed his experiences as the only RAAF officer to fly over Tokyo on a raid, and gave a graphic description the scene of destruction in Hiroshima in the aftermath of the atomic bomb. Returning to Australia in March 1946, Hemery was discharged from the RAAF with the rank of flying officer. He continued his broadcasting career after the war with radio station 2GB, changing his name to ‘Peter Barry’. He brought back to Australia a portable wire recorder which he had used during the war and began ‘on the spot’ radio interviews allowing him to present the local news as it happened. This wire recorder was the precursor of the tape recorder. Hemery became a keen pilot after learning to fly in the early 1960s. He was preparing to take part in the1969 London to Sydney Air race when his Piper Aztec crashed on 9 July and he was killed.