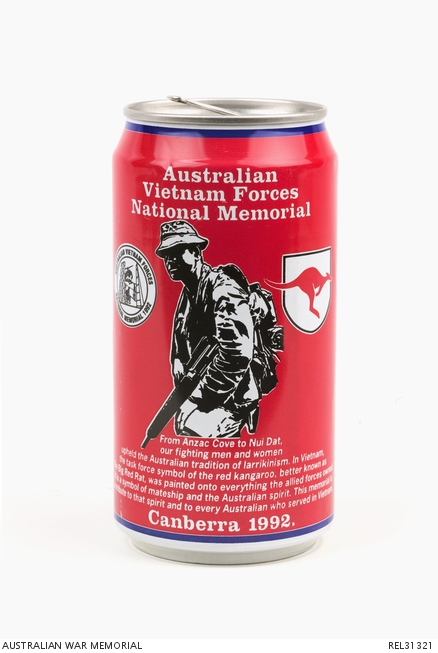 Empty 375ml aluminium beer can with ring pull top. The red can has narrow blue borders top and bottom, and white lettering. One side bears the logo for Power's Big Red Bitter Ale. The other side shows a Vietnam period digger in black and white. On his left is a round black and white badge with the words 'AUSTRALIAN VIETNAM FORCES NATIONAL MEMORIAL 1992' and an image of the Memorial in the centre. To the left of the digger is a white shield bearing a red kangaroo. Above the digger are the words 'Australian Vietnam Forces National Memorial'. Beneath is 'From Anzac Cove to Nui Dat, our fighting men and women upheld the Australian tradition of larrikinism. In vietnam, the Task Force symbol of the red kangaroo, better known as the Big Red Rat, was painted onto everything the allied forces owned. It is a symbol of mateship and the Australian spirit. This Memorial is a tribute to that spirit and to every australian who served in Vietnam. Canberra 1992'.

These cans were specially produced by the Power Brewing Company in Queensland to commemorate the Welcome Home march of Vietnam veterans and the opening of the Australian Vietnam Forces National Memorial in Canberra in October 1992.