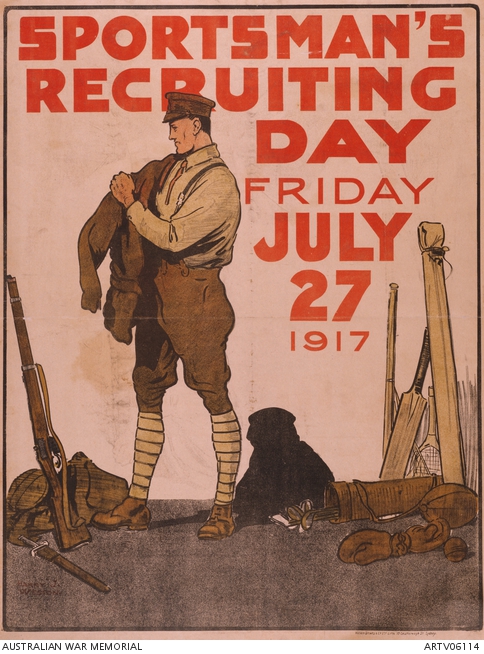 Australian First World War recruitment poster advertising a 'Sportsman's Recruiting Day' Friday 27 July 1917. It features an image of a man donning his soldier's uniform on the left side of the poster. In the right his disgarded sporting equipment including a football, boxing gloves, a tennis racket and golf clubs are visible. The title, printed in red, is postioned above and behind the image. Both image and text are framed within a black border. Australian posters produced during the First World War were almost entirely concerned with recruiting men for the AIF. These campaigns were coordinated by the Commonwealth Government and by state recruiting committees working through voluntary local bodies. Harry J Weston (1874-1938) was a cartoonist, painter, commercial artist and architect. Weston was a member of many clubs and societies, and associated with many of Australia's now famous cartoonists and illustrators. He is known for drawing the cover of 'the first publication issued under the auspices of the Society of Australian Black and White Artists'.