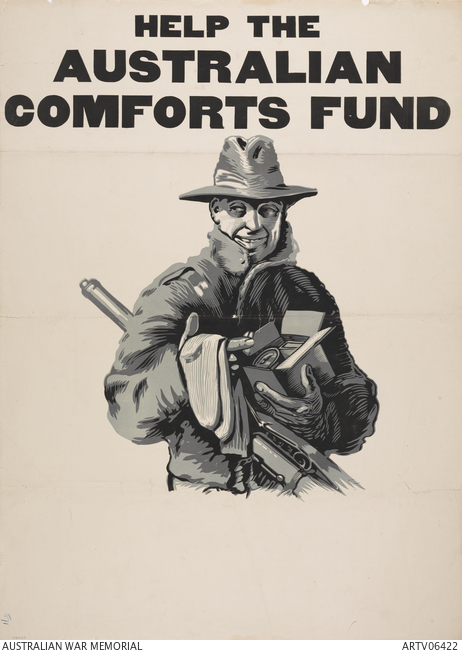 Australian First World War poster promoting the work of the Australian Comforts Fund (ACF). It features a central image printed in monotone of a smiling Australian soldier in a shabby uniform, his rifle under his right arm. The great coat he is wearing indicates he is at the front. In his right hand he is holding a new pair of socks and in his left his newly opened parcel from the ACF. Small tins and boxes are visible in the box. The title text is printed in black in the upper centre. Both the image and text are set against a cream background. The Australian Comforts Fund (ACF) was first formed in August 1916 from a number of individual state based organisations that had been created at the beginning of World War I to send comfort to the troops. Many local women's groups formed early in the war to provide various 'luxury items' to supplement the Australian soldier's army rations and personal kit. The Australian Comforts Fund quickly grew into a fundraising, collecting, sorting and distributing machine which rivalled the scope of the Red Cross. At the conclusion of World War I, the ACF officially dissolved. However it was revived in 1939 with the outbreak of World War II to provide comforts to a new generation of soldiers. It ceased operation again on 27 June 1946.