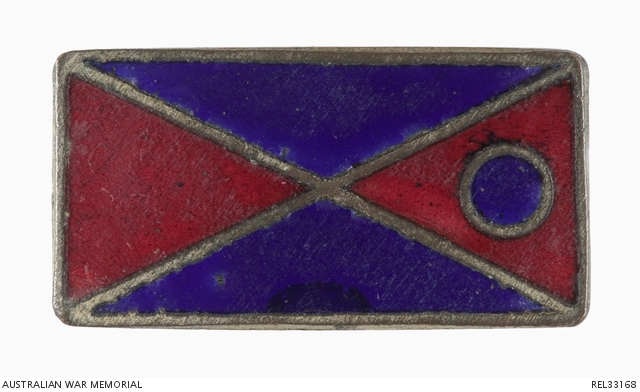 Enamel on metal sweetheart brooch showing the colour patch of 3rd (Army) Brigade, Australian Field Artillery. The patch takes the form of two opposing upper and lower triangles in blue, with intersecting opposing triangles in red on either side. The right side red triangle bears a small blue circle. The brooch originally had a pin backing, which has been broken off.

Associated with 36906 Driver (later Gunner) Archibald Thomas Edwin Hood who served with 3 Field Artillery Brigade, AIF and 3 (Army) Brigade, Australian Field Artillery during the First World War. Hood, an 18 year old salesman and driver from Melbourne, Victoria, enlisted 28 August 1917 and was assigned to the general reinforcements for the field artillery brigades. He sailed from Melbourne, for France, on HMAT A15 Port Sydney on 9 November 1917. After service on the Western Front Hood returned to Australia on 9 July 1919.