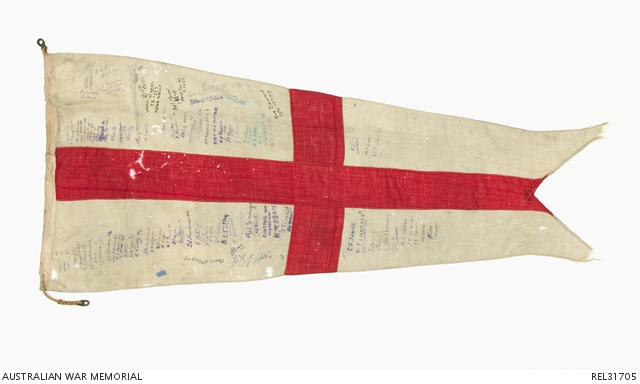 White wool bunting ship's swallow-tailed commissioning pennant with a red cross of St George. The white sections of the pennant bear signatures of members of the ship's company, written in ink and indelible pencil.

Autographed commissioning pennant associated with HMAS Maryborough, a Bathurst class of minesweeper (or corvette), built by Walker’s Limited in Maryborough, Queensland. She was built in Australia on Admiralty order, but was manned and commissioned by the Royal Australian Navy (RAN). The Maryborough was launched on 17 October 1940, by Mrs Goldsmith, wife of the General Manager of Walkers Ltd. She was commissioned under the command of Lieutenant Commander Glen Loftus Cant on 15 June 1941. The ship had a complement of five officers and 85 ratings on her shakedown cruise to Hobart, Tasmania. She worked on the east coast of Australia, before proceeding to Singapore in November 1941. On 28 November she joined the 21st Mine Sweeping Flotilla. Following Japan’s entry into the war in December 1941, HMAS Maryborough took part in the Malaya-Java-Sumatra operations until March 1942. From March to November 1942 she was based at Fremantle, taking part in escort and patrol duties. In November she left Fremantle to join the Eastern Fleet, escorting ships from Colombo to Bombay and the Persian Gulf. In May 1943 HMAS Maryborough spent five months operating convoy escorts and anti-submarine patrols in the Mediterranean, including participation in Operation Husky, in support of the Sicily landings, returning to the Indian Ocean in November to resume convoy escort duties. She spent December to mid March at Fremantle, before heading to Sydney. Maryborough spent the rest of the war on patrol in the waters around Australia and New Guinea. After peace was declared she spent three weeks mine sweeping at Hong Kong. In 1947 the ship was sold to Australian General Trading and Shipping Syndicate, Sydney and renamed Isobel Queen. She was resold in 1953 for breaking up.