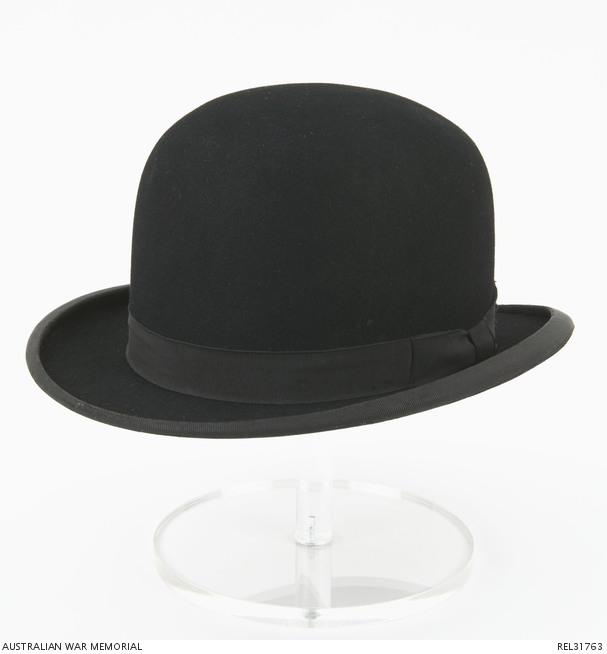 Black fur felt bowler hat presented to the crew of Lancaster AR-J2, 460 Squadron RAAF. The brim is bound in black grosgrain ribbon, and there is a hat band of similar ribbon around the base of the crown. The brown leather headband is stamped in gold with the maker's markings 'Bradleys FIT & COMFORT Bradleys Cheshire Cat BRAND CESTRIA FÊLÊS REGISTERED' and also impressed 'Guaranteed all Fur'. A number of personal inscriptions in blue ink are also present on the headband. Some are illegible, those which are still visible reading: 'TO YOUNG LOGGER LONG MAY YOU LIVE SNOW', 'ENGLAND 1944 J.C.B.', 'BEST OF LUCK JOYCE', 'TO LOGGA JACK & MAC - TICH' and 'TO WEE JOCK LANG MAY YER LAM REEK TICH'. The other markings include the words 'good luck' and 'Happy Landings'.

'Jasper's Hat', a black bowler given to a Lancaster bomber crew at 30 Operational Training Unit (OTU), Hixon, Staffordshire, in 1944. The crew, five of whom were Australian, were in the habit of drinking at a small pub called 'The Barley Mow', where their Scottish bomb aimer's singing was a source of entertainment to the locals. The final song of the evening - 'The Wife', was inevitably sung while wearing a bowler hat borrowed from Jasper, an elderly farm labourer and ploughman who was a regular at the pub. On their last visit to the 'The Barley Mow' before proceeding on operations, Jasper presented the hat to the crew as a keepsake. They were posted to 460 Squadron RAAF, where their regular aircraft became AR-J2 ('Jig Two'). The captain, Flying Officer L C 'Tich' Palmer established a tradition, on operational flights, of donning the hat as the aircraft approached its target. The navigator, Pilot Officer Jeff Mackay, recalled that 'although he looked rather ridiculous, we all felt a little safer'. The war ended before Palmer and his crew had completed their tour of operations, and the various members soon lost touch. They were not reunited until 1970, when Jasper's Hat once again took pride of place at their gathering. The full crew was: 7029 Flying Officer Leighton Courtney 'Tich' Palmer RAAF (pilot), 431366 Pilot Officer William Jeffery 'Jeff' Mackay RAAF (navigator), 428670 Warrant Officer Patrick Carl 'Logger' Dowling RAAF (wireless operator), 436989 Warrant Officer Neville Bishop 'Snowy' Johnson RAAF (rear gunner), 435999 Warrant Officer Jack Barden Haining RAAF (mid upper gunner), Archibald 'Jock' Buchanan RAF (bomb aimer) and Flight Sergeant David G Paull RAF (flight engineer).