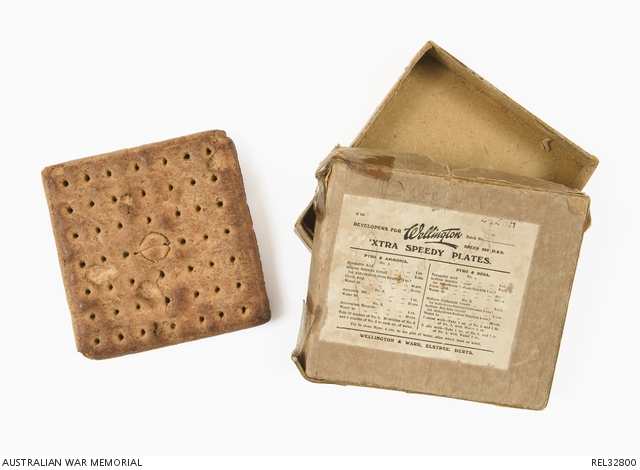 Square, hard tack ration biscuit with forty-nine perforations in a grid pattern across the top. There is also a halved circle pressed into the centre. The biscuit is wrapped in tissue paper and housed in a brown cardboard box with lid that was originally used for photographic plates. Glued to the lid is a paper label for ‘Wellington ‘XTRA SPEEDY PLATES.’

This ration biscuit was collected by 829 Corporal Joseph Richards during the Boer War. These biscuits were issued to troops and known as ‘forty-niners’ because of the 49 holes indented across the top. Richards, born on 31 May 1880, was working as a stereotyper before the war and also served as a lance corporal in 1 Battalion Infantry Brigade of the Victorian Military Forces with the service number 3651. On 15 February 1901 he sailed for South Africa from Melbourne with 5 Victorian Mounted Rifles Contingent. He returned to Melbourne on 26 April 1902.