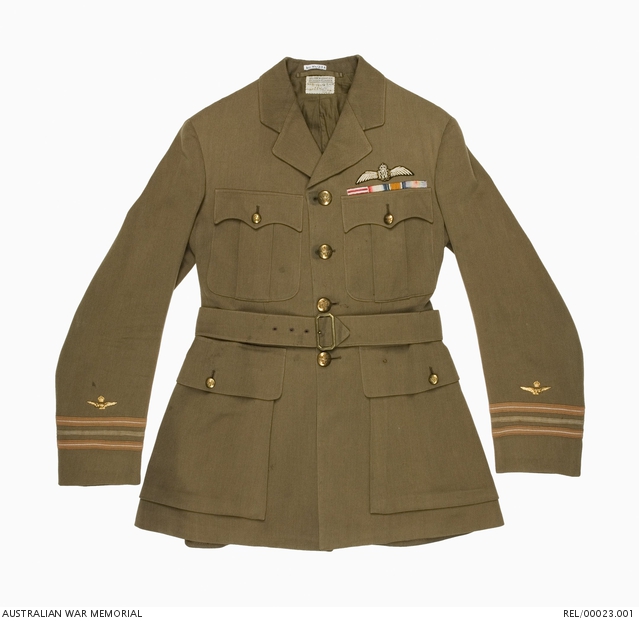 Royal Air Force officer's khaki wool gabardine service dress tunic complete with self fabric belt with brass buckle. The tunic has pleated breast pockets with triple pointed flaps, and large expanding pockets over each hip, with plain flaps. The pockets and front of the tunic fasten with gilded brass RAF eagle and king's crown buttons. Each lower sleeve bears woven khaki and blue cotton rank stripes for squadron leader, with a gilded eagle and crown above them. There is an embroidered white and brown cotton RAF pilot's brevet above the left breast pocket. Beneath the wings is a ribbon bar for Air Force Cross, 1914 Star, British War Medal 1914-20 and Victory Medal. The body of the tunic is lined with brown twilled cotton and the sleeves with cream cotton. A woven manufacturer's label is sewn to the centre back neck. It is marked in ink '459 14.4.18 Capt C O Fairbairn R.A.F.'.

This tunic was worn by Squadron Leader Charles Osborne Fairbairn, who served in the British Army, Royal Flying Corps and the Royal Air Force during the First World War. Born in Melbourne in 1893, and educated at Geelong Grammar, he was studying at Jesus College, Cambridge University, when war was declared. Fairbairn initially joined the British Army, serving as a lieutenant with 3 Battalion, The Loyal North Lancashire Regiment. He transferred to the Royal Flying Corps in 1915, qualifying as a pilot. In 1916 he was promoted to flight commander (captain). He was appointed to be an instructor at No 5 School in August 1917. When then the RFC became the Royal Air Force in April 1918, Fairbairn was again listed as a captain. He was acting as a major in October 1918. After the war he returned to Australia with the rank of squadron leader. Fairbairn was a brother of James Valentine Fairbairn, who also served with the RFC as a pilot, the Minister for Air, who was killed in an aircrash near Canberra in 1940.