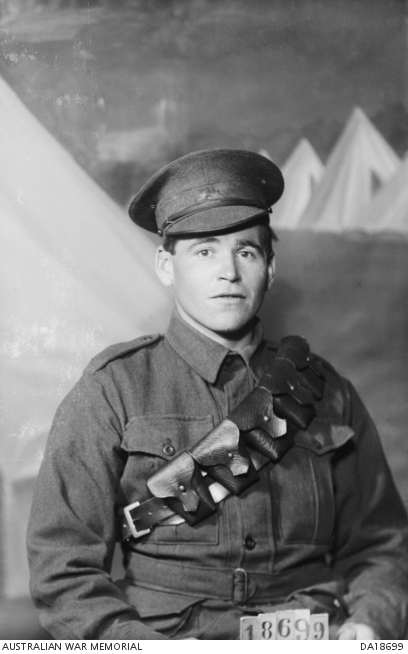 Studio portrait of 21510 Sapper (Spr) James Arthur Morrison. A clerk from Wahroonga, NSW prior to enlistment, Spr Morrison underwent training at the AIF Signals School at Seymour before embarking with the Signallers Special Reinforcements from Melbourne on HMAT Nestor on 28 February 1918. He later served with the 1st Signals Company and, following the Armistice, was granted leave to remain in England in order to train as a telephone mechanic. On completion of his training he was appointed as Acting Canteen Sergeant and returned to Australia on 6 October 1919. This is one of a series of photographs taken by the Darge Photographic Company which had a concession to take photographs at the Broadmeadows and Seymour army camps during the First World War. In the 1930s, the Australian War Memorial purchased the original glass negatives from Algernon Darge, along with the photographers’ notebooks.