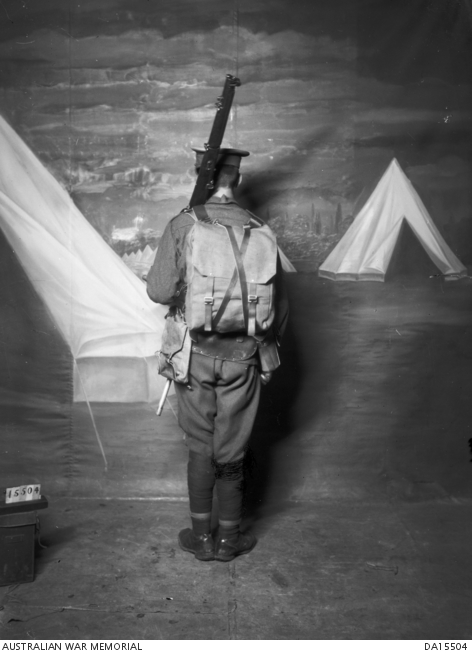 Informal studio portrait of 5054 Acting Corporal Edgar Allan Maxwell, 22nd Battalion, of Sandy Creek, near Wodonga, Vic. He has turned his back to the camera and his pack can be seen. A farmer before enlisting on 4 February 1916, he held the rank of Acting Corporal while in camp from 27 April 1916 and was transferred from Seymour to Broadmeadows camp on 21 May 1916. He embarked from Melbourne on HMAT Ayrshire as a Private with the 13th reinforcements to the 22nd on 3 July 1916. Cpl Maxwell was killed in action on 3 October 1917 in Belgium, at the age of 25, and is buried at the Railway Dugouts Burial Ground (Transport Farm) at Zillebeke. This is one of a series of photographs taken by the Darge Photographic Company which had the concession to take photographs at the Broadmeadows and Seymour army camps during the First World War.