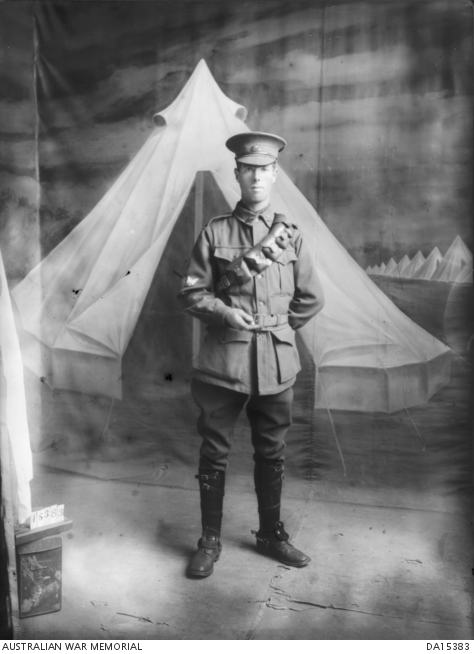 Studio portrait of 14336 Sapper (Spr) Allen Percival Johnston, 1st Australian Wireless Squadron. A telegraphist from Garden vale, Victoria prior to enlistment, Spr Johnston embarked from Melbourne on RMS Morea on 30 May 1916. Later serving with the 1st Australian and New Zealand Wireless Signals Squadron in the Middle East, he was awarded the Distinguished Conduct Medal. The citation reads in part "For conspicuous gallantry and devotion to duty...He carried out good work under most trying and hazardous circumstances". He returned to Australia on 22 May 1919. This is one of a series of photographs taken by the Darge Photographic Company which had the concession to take photographs at the Broadmeadows and Seymour army camps during the First World War. In the 1930s, the Australian War Memorial purchased the original glass negatives from Algernon Darge, along with the photographers' notebooks. The notebooks contain brief details, usually a surname or unit name, for each negative.