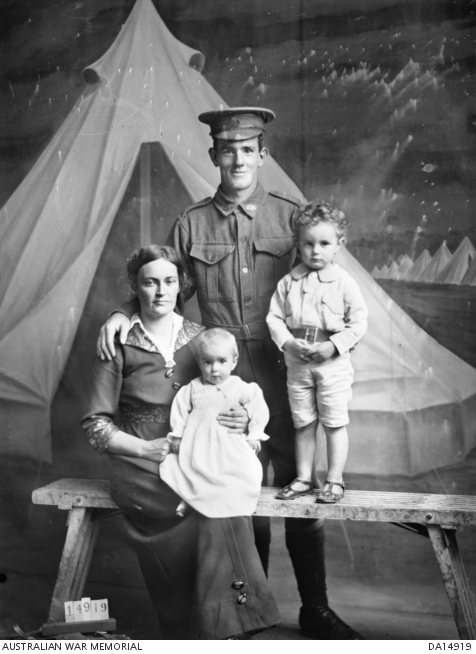 Studio portrait of 4802 Private (Pte) John James White, 22nd Battalion. A blacksmith from Briagolong, Victoria, prior to enlistment, Pte White embarked with the 12th Reinforcements from Melbourne aboard HMAT Euripides on 4 April 1916. Later promoted to Sergeant (Sgt), he was killed in action during the Second Battle of Bullecourt on 3 May 1917, aged 29. In December 1994 a farmer ploughing a field near the memorial at Bullecourt unearthed the remains of an Australian soldier. Among these were a letter, a lock of hair, and an identity disc, all belonging to Sgt White. A ceremony was held in October 1995 and Sgt White was buried in the Queant Road Cemetery, Buissy, France almost 80 years after his death in the presence of the only surviving member of his immediate family, his daughter Myrle. The small lock of hair which belonged to his wife Lillian was placed in the grave with his remains. This is one of a series of photographs taken by the Darge Photographic Company which had a concession to take photographs at the Broadmeadows and Seymour army camps during the First World War. In the 1930s, the Australian War Memorial purchased the original glass negatives from Algernon Darge, along with the photographers' notebooks. The notebooks contain brief details, usually a surname or unit name, for each negative. See also DA14920.