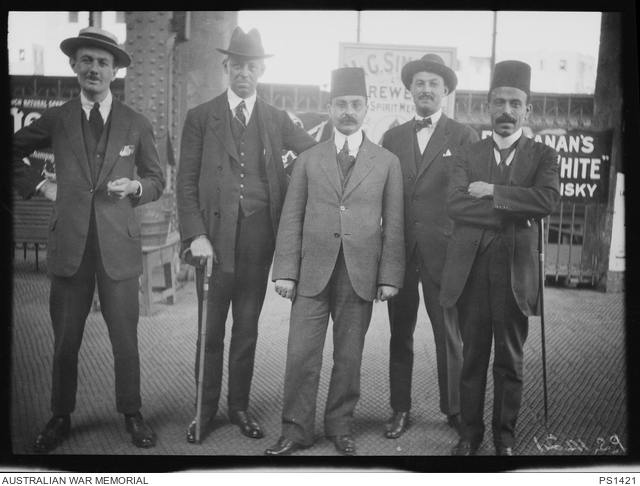 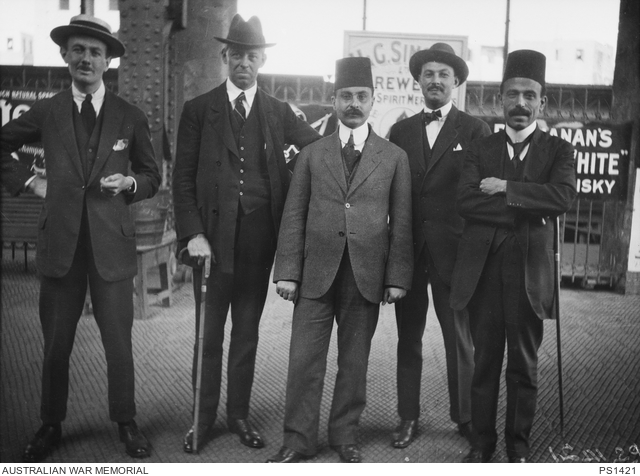 Group portrait of war correspondents and others at a Cairo railway station. They are, from left to right: Joseph Mary Nagle (J M N) Jeffries, Daily Mail (London); William Thomas (W T) Massey, Daily Telegraph (London); Dr Makarius, editor of the Mokattam newspaper (Cairo); Philip Frederick Schuler, The Age (Melbourne) and unknown man, possibly a member of the Egyptian Legislative Assembly. Schuler accompanied the 1st Australian Division of the AIF to Egypt. Initially refused permission to land at Gallipoli, Schuler finally received accreditation and arrived on the peninsula in July 1915. After the failure of the Dardanelles campaign he returned to Australia and wrote two books on the Australian involvement: The Battlefields of Anzac and Australia in Arms. On 7 April 1916 Phillip Schuler enlisted as a driver (10926) in the 3rd Divisional Train, Australian Army Service Corps (AASC). He embarked from Melbourne on 3 June 1916 aboard HMAT Persic (A34). During his service Schuler was promoted to Lieutenant. He died of wounds in France on the 23 June 1917, aged 27.The photograph was possibly taken by George Renwick, Daily Chronicle (London) who spent time with Schuler and Massey in Egypt.