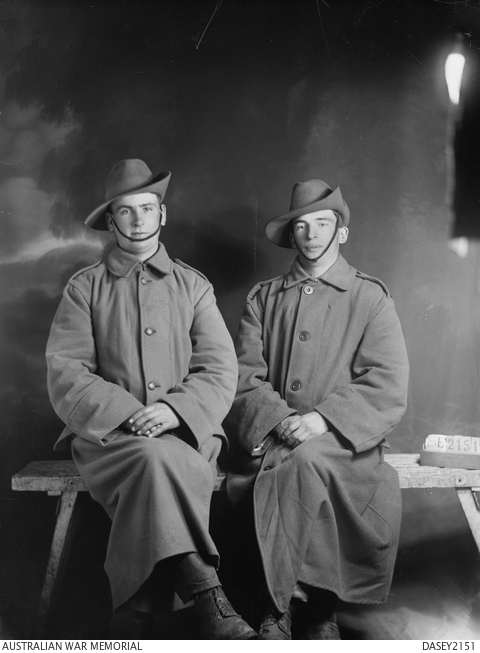 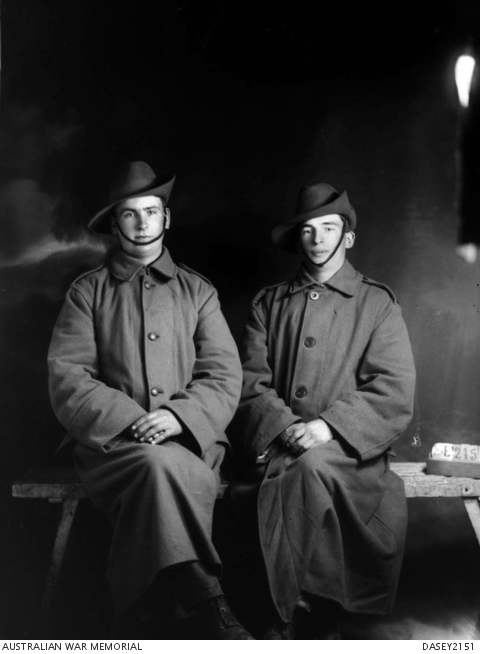 Studio portrait of two member of the 22nd Battalion who embarked for overseas with the 6th Reinforcements from Melbourne on 27 October 1915 aboard HMAT Ulysses. On the left is 2759 Private (Pte) Patrick John O'Loughlin from Warragul, Victoria who was a 19 year old grocer prior to enlisting on 13 July 1915. Pte O'Loughlin was killed in action in France on 8 August 1918 and is commemorated on the Villers Bretonneux Memorial, France. On the right is 2729 Pte George Henry Moore from Yarraville, Victoria who was a 22 year old labourer prior to enlisting on 20 July 1915. Pte Moore was taken ill while serving in France and invalided home, arriving back in Australia on 9 May 1916. This is one of a series of photographs taken by the Darge Photographic Company which had the concession to take photographs at the Broadmeadows and Seymour army camps during the First World War. In the 1930s, the Australian War Memorial purchased the original glass negatives from Algernon Darge, along with the photographers' notebooks. The notebooks contain brief details, usually a surname or unit name, for each negative. The names are transcribed as they appear in the notebooks.