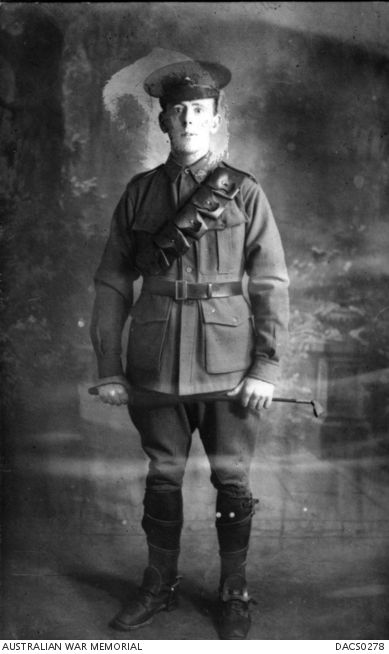 Portrait of Archi King copied for the Cobram Honour Roll. The soldier is probably 4527 Private (Pte) Archibald (Archie) King, a farm hand from Richmond, Victoria, prior to enlistment. His father was living at Barooga, NSW, near Cobram, at the time of Archibald's enlistment. Pte King embarked from Melbourne with the 14th Reinforcements, 7th Battalion, aboard HMAT Themistocles (A32) on 28 January 1916. In August 1916 he received a gunshot wound to the chest and returned to Australia on 13 February 1917. Archibald King also served in the Second World War. During the First World War the Cobram and District Soldiers Fund initiated a project to create a Cobram Honour Roll. It was to include portraits of servicemen who had links to the Cobram area. The Fund arranged for portraits to be copied by the Darge Photographic Company at its Collins Street Studio, Melbourne. Around 100 copy prints were supplied by the Darge company but it is not known if the roll was ever constructed. In the 1930s, the Australian War Memorial purchased original glass negatives from Algernon Darge, along with the photographers' notebooks. The notebooks contain brief details, usually a surname or unit name, for each negative. The names are transcribed as they appear in the notebooks.