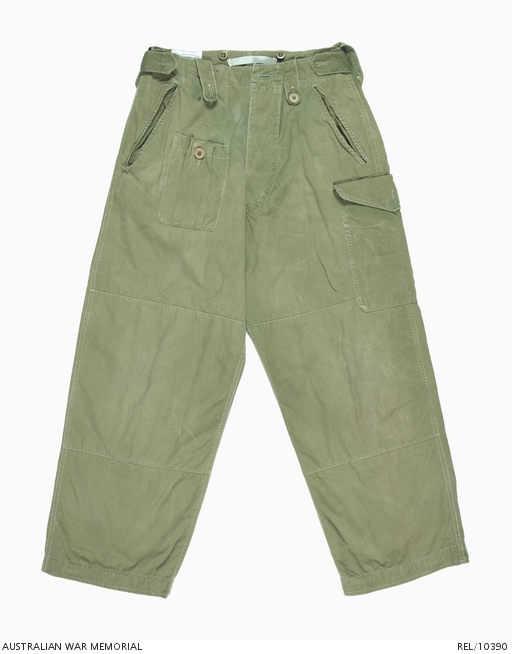 Pair of British Army 1952 pattern olive green cold weather combat trousers as issued to Australian forces during the Korean War. The trousers are made from a double thickness of fine cotton gabardine with a third reinforcing layer at the seat and knees. There are a pair of slash hip pockets and a single patch pocket on the right rear with a button closure. There is also a cargo patch pocket with a button flap closure on the left thigh and a pleated patch pocket with a top button closure (probably to hold a field dressing) on the upper right front thigh. The trousers have a zipper fly, concealed by a flap with a further two concealed buttons. There are six green plastic buttons inside the waistband for the attachment of braces, as well as five external button-down belt loops. Many of the buttons are missing. The waist is gathered by a pair of fabric tabs at the hip which attach to plastic buttons at the rear. At the ankles there is provision for the fitting of drawstrings, but these are not fitted. Inside the rear waistband is a white cotton label printed in black with the words 'Trousers, Combat 1952 Pattern Size No. 1. Height 5ft. 3in. to 5ft. 6in. Waist 28in to 30 in. Seat 35in. to 37in. Supercraft (Garments) Ltd. 1952.' and a Broad Arrow.

The 'Trousers, Combat, 1952 Pattern' were designed during the Korean War to give British troops some much needed protection from the bitter Korean winter. Both they, and the combat jacket with which they were normally worn, proved successful in service, being resistant to rain, wind and cold, and were developed into the M58 Combat Dress, which remained standard British Army clothing for many years. These trousers were issued to 25627 Captain Henry Lawrie ('Harry') Bell during his service with 1 Battalion, the Royal Australian Regiment, in Korea after the Armistice. Bell joined 1 RAR at Gallipoli Camp in June 1955, and remained with the unit until their withdrawal to Australia in March 1956. He later saw service in New Guinea and Vietnam.