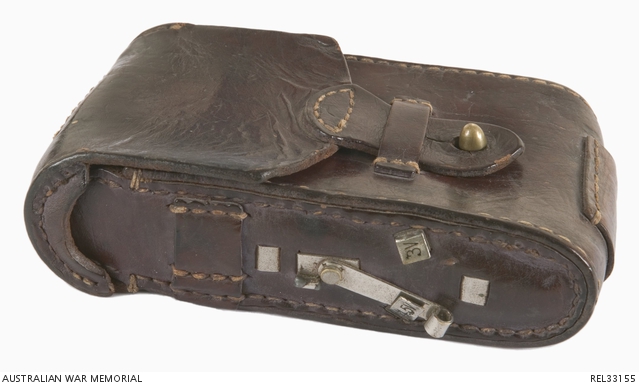 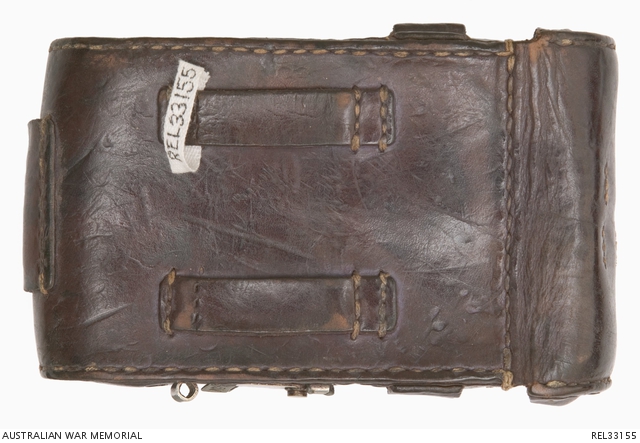 Brown leather signals battery case fitted with a pair of belt suspension loops and an alternative set of three loops for a carrying strap. The exterior of the case is fitted with a variable voltage switch (3 or 4.5 Volt) and the interior has battery contacts and a leather fitting for the small signal lamp. All the interior contents are missing. The case is closed with a flap which is secured through a leather keeper and slots into a brass post.

Associated with the service of N286126 Mervyn Neil Ritchie, 24 Battalion, of Newcastle, NSW. Chinese note collected by N286126 Mervyn Neil Ritchie, 24 Infantry Battalion, Citizens Military Forces. Ritchie was born on 5 April 1924 at Newcastle, New South Wales. A labourer, he enlisted on 19 May 1942 at Lambton in New South Wales. Ritchie marched out to 8 Infantry Training Battalion on 9 July 1942 in Dubbo. Suffering from the mumps, he was transferred to 3 Camp Hospital on 1 September 1942, and rejoined his unit on 23 September. He marched out to 28 Australian Infantry Training Battalion, Dubbo, on 22 October 1942 and was placed on X List. Throughout 1943 and 1944, Ritchie remained in Queensland. Ritchie transferred from Queensland Lines of Communication General Details Depot to Headquarters Australian Infantry Centre Jungle Warfare, Canungra, on 27 February 1945. He then marched out to Defence New Guinea Details Depot on 10 April 1945. Ritchie embarked at Brisbane on board ‘Katoomba’ on 14 May 1945. He disembarked at the island of Torokina, just off Bougainville, on 25 May 1945, and on the same day marched out to 24 Infantry Battalion, Bougainville. The liberation of Bougainville was long and arduous, with Australians fighting alongside local recruits, in harsh jungle terrain. By mid August 1945 the fighting was over. General Hyakutake of the Japanese XVII Army formally surrendered on 8 September 1945. Ritchie embarked on board 'Westralia’ at Torokina on 24 November 1945. He disembarked at Brisbane on 28 November 1945, and was discharged on 11 December 1945. Ritchie collected this item while on Bougainville.