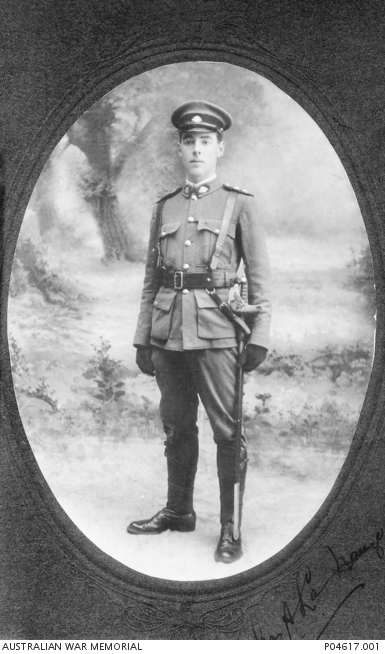 Studio portrait of Captain (Capt) Charles Andrew La Nauze, 11th Battalion, of Boulder, WA. Capt La Nauze was born in Mauritius in 1881and was educated at the Royal College there; he emigrated to Australia with his parents when he was 16 years of age. Capt La Nauze was first commissioned on 26 July 1901 in the British Army and in 1905 into the Australian Army. At the time of his enlistment he was an accountant in the West Australian Bank. He embarked from Fremantle, WA, aboard HMAT Ascanius on 2 November 1914. He was killed in action on 28 June 1915 at Gallipoli Peninsula and was buried at Shell Green Cemetery by Chaplain J C McPhee. Capt La Nauze was the grandson of Capt La Nauze of the Indian Light Cavalry. His brother George was the supervisor of the cable station on Cocos Island at the time of the Emden's attack on that island.