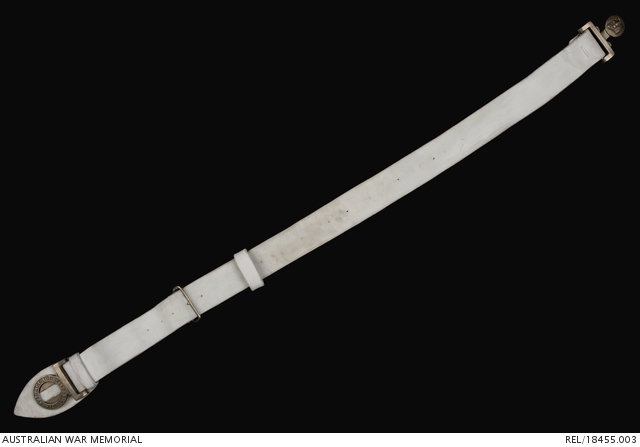 Buff leather waist belt (similar to the pattern described in the List of Changes 508 1862) with Other Ranks Victorian Military Forces nickel-plated brass union locket buckle. The belt is made from one piece of leather measuring 1 3/4 inches wide. A single nickel-plated brass buckle on the proper left side provides adjustment to the length of the belt. The belt is secured through the buckle to the proper right side with a leather thong. The locket (tongue) of the buckle depicts a Queen Victoria pattern crown. The circular surround has the words 'AUT PACE AUT BELLO VICTORIA' (In Peace and in War). A running loop lies at each end of the belt behind the buckle. A lanceolate leather safe is stitched to the proper left running loop. 'CMSD' and 'C 152' are stamped in ink on the reverse. A faint circular maker's mark is stamped on the reverse of the safe but is illegible. A name is also handwritten on the reverse of the belt and is not legible but is not 'Stewart'.

This belt has been associated with Private Charles John Stewart who served with the Victorian Scottish Regiment. The regiment was formed in August 1898 and was commanded by Sir Malcolm McEchran. Members were enlisted under the Defences and Discipline Act 1890 and were engaged for a period of three years. No person was allowed to be engaged unless he was born in Scotland or was of Scottish descent, or had prior service with the imperial regular force, colonial militia or auxiliary force. Men had to provide their own uniforms so the Regiment paraded in their own clothes until the end of 1899 when 100 uniforms became available for purchase. 694 Private Stewart served with the 5th Mounted Rifles (Victorian) Contingent to the Boer War, which left for South Africa in February 1901. Stewart was invalided and returned to Australia on 29 January 1902. He may have continued to serve with the VSR after his return to Australia. In 1912 the VSR were re-designated the 52nd Hobson's Bay Infantry. Four of the volunteer companies, A,B,C and D were located in South Melbourne and continued to wear Scottish dress.