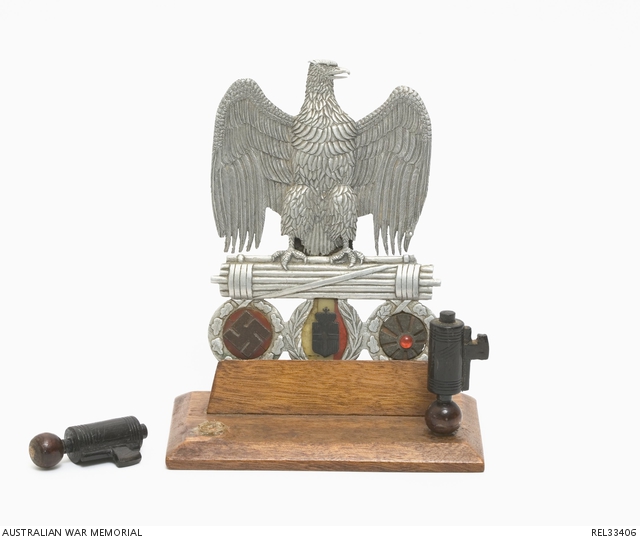 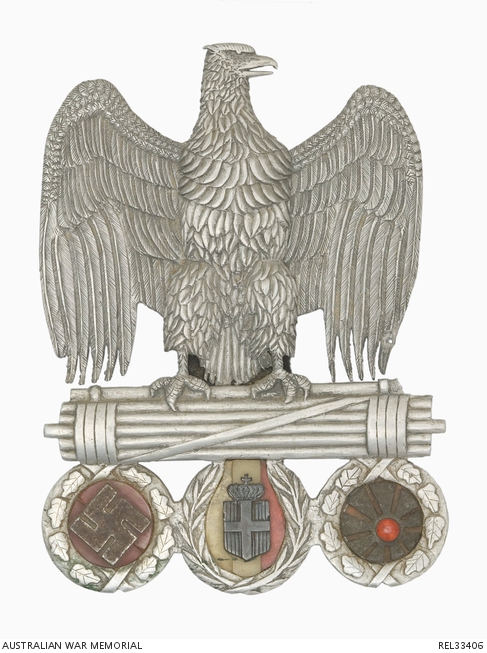 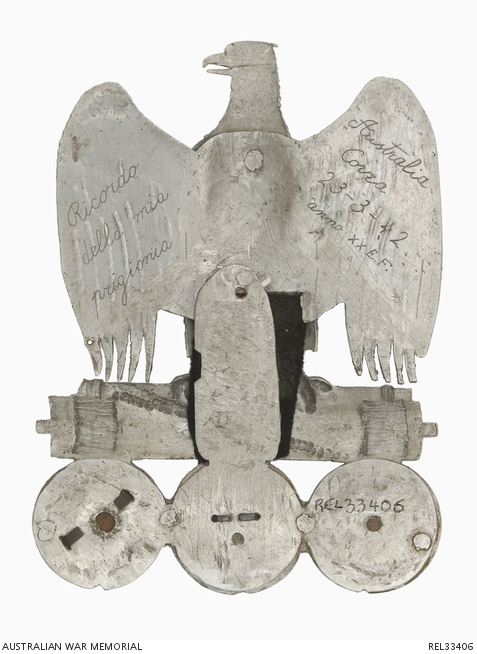 Ornate, finely worked fascist eagle clasping a Roman fasces, from which are suspended the symbols of the three Axis allies, each contained within a decorated wreath. From left to right they are: the Nazi swastika; the Italian arms and the Japanese 'rising sun' flag. Each symbol sits on a coloured backing made from plastic Tek toothbrush handles - red for the Japanese and German, and yellow and red for Italy. The centre of the Japanese flag is realised by a translucent red bead. The reverse is inscribed 'Ricordo della mia prigionia (in memory of my imprisonment) / Australia Covra [sic] 23-3-42 anno XX E.F.' The whole is mounted on a pair of varnished, patterned wooden dowels glued to a wooden card-holder, with all edges bevelled, from which one dowel and the eagle is detached. The eagle is made from thin sheet lead or alloy taken from used toothpaste tubes.

N75115 Captain Sydney Levine served in the militia as a dental surgeon from June 1940. He was first posted to the Army Dental Centre at Ingleburn, NSW, before being transferred to 17 Field Ambulance. Based at Bathurst, NSW, he regularly visited the Cowra POW Camp to provide dental services to the inmates. It was on one of these visits that a grateful Italian prisoner presented him with this 'Tek art' desk ornament.

In August 1942 Levine enlisted in the AIF and was assigned the service number NX111950. He served with 117 Field Ambulance and 114 Convalescent Depot before being promoted to major in November 1942 and appointed Officer Commanding (OC) 58 Army Dental Unit (ADU). Levine subsequently served in New Guinea at Port Moresby and Madang, where he was OC of 71 and 68 ADUs, and at Jacquinot Bay in New Britain, where he commanded 83 ADU. He was discharged from the army on 5 September 1945. Levine later served as a lieutenant colonel the Citizen's Military Force between 1963 and 1971, as a consultant periodontist to the army.