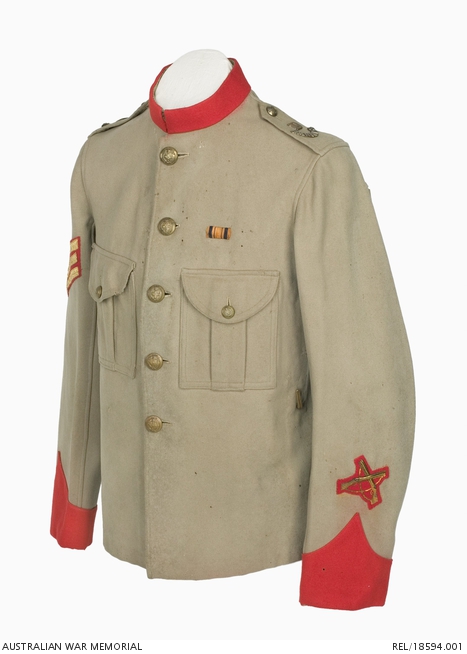 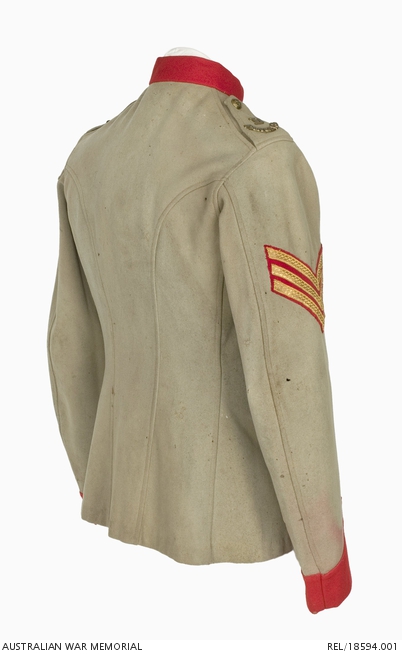 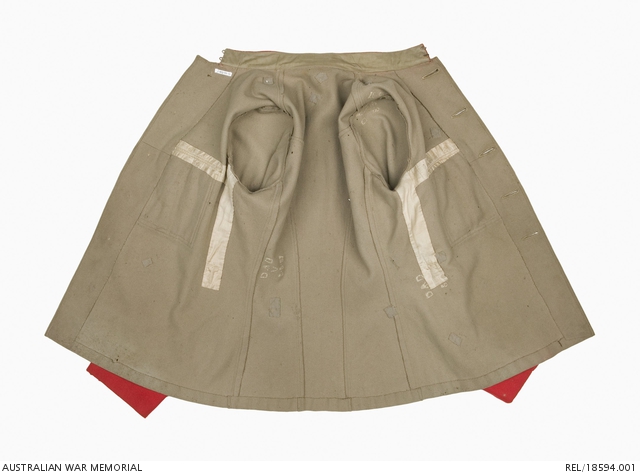 Pale khaki wool serge tunic with scarlet stand collar and pointed cuffs. Khaki serge shoulder straps, lined with khaki cotton twill, each have brass shoulder titles ' D' with 'RANGERS' below and a single small Victorian Military Forces button. Above the scarlet pointed cuff on the left sleeve is an embroidered gold bullion marksman's qualification badge on a red wool ground. On the right sleeve above the elbow are three gold sergeant's chevrons on a red ground. Front of tunic has pleated patch pockets at the breast with round flaps and single small Victorian Military Forces button; above the left pocket is a piece of silk ribbon for the South Africa Medal of 1877-1879. Front of tunic is fastened with five brass Victorian Military Forces buttons of the 1883-1893 period made by 'H.W MARTIN LONDON' and 'BRYAN BROTHERS LONDON'. Brass belt hooks at each side of waist. Inside of tunic unlined except for strips of linen and cotton twill around top of pockets and down the sides to the belt hooks. Inside the back panel, front and sleeves each stamped in white 'D' ^ 'D', with 'V' beneath and '8.5.97' below. Collar has been relined with plain khaki cotton. Neck fastens with two ferrous metal hooks and eyes. Loose inside the left pocket is an embroidered gold bullion marksman's badge on red wool.

The Victorian Rifle Volunteers were renamed the Victorian Rangers in 1889 and were often made up of members of rifle clubs from various country districts. There were three battalions of Rangers, each comprising companies from surrounding areas. 'D' Company's headquarters were at Ararat with detachments at Moyston, Cathcart and Beaufort. Members of the Rangers were provided with a rifle, bayonet, waistbelt and other leather accessories, but had to provide their own uniform made to the authorized pattern which included khaki trousers and brown felt hat and puggaree. The hat was later changed to a khaki helmet. In 1899 the 1st Victorian Contingent to the Boer War included members of the Victorian Rangers.