The spirit of the British Commonwealth of Nations has never been better demonstrated than as ... 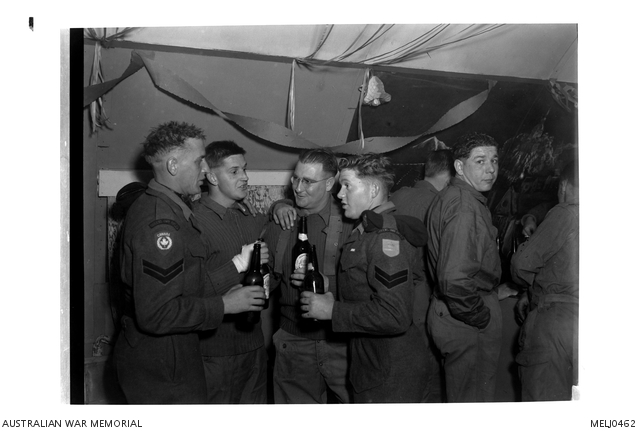 The spirit of the British Commonwealth of Nations has never been better demonstrated than as embodied in 1 Commonwealth Division in Korea. Through the ups and downs of the Korean situation, the units of the various British Nations have always helped one another out during the bad times, and shared what good things came their way. During the current festive season the Brits and Canucks (Canadians) and Kiwis and Diggers are taking full advantage of the opportunity to visit one another and celebrate together. This group was snapped when Canucks of the Queens Own Rifles of Canada were guests of Support Company, 1st Battalion, The Royal Australian Regiment (1RAR), at the company's Christmas party. Left to right: Corporal (Cpl) Tex Lapierre of Ontario; 27732 Cpl Brian William Cook of Parkes, NSW; 13010 Cpl Maxwell (Max) Kelly of Bundaberg, Qld; and Cpl Cyril Graham of Ontario. Before joining the army Cpl Cook worked for the firm of Hammond and Sons in Parkes, and played on the wing for Parkes Reserve Grade Rugby League team. Cpl Kelly can claim to be one of the really original members of 1RAR. After serving with 2/12 Infantry Battalion during the Second World War, Cpl Kelly went to the British Commonwealth Occupation Force (BCOF) in Japan as a member of 65 Battalion, which eventually became 1RAR. He had a spell out of the service between 1947 and 1952, working at his profession of sugar chemist at Babinda sugar mill, but his army ties claimed him again, and he is now happy to be back in his element with the machine gunners of 1RAR. (Original British Commonwealth Forces Korea (BCFK) Public Relations caption).