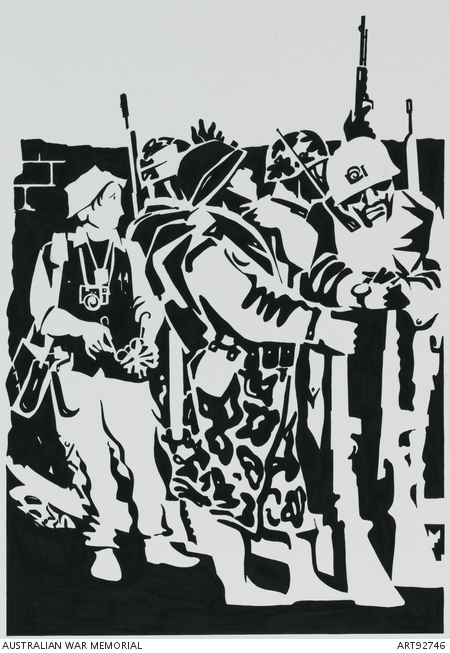 Depicts a the silhouettes of a number of soldiers, in full uniform, standing around, as if waiting for a command. Behind them is a pensive looking journalist . He carries a satchel, wears a camera around his neck and is cleaning his glasses. The illustration appeared in the 'Sydney Morning Herald' 14 January 2005, in response to the War in Iraq. The artist's statement accompanying this work notes; 'This concerns journalists at war and the inevitable ambivalence they must feel (particularly if 'embedded', a poor attempt at media manipulation that all too often backfired). On the one hand bonding with the unit they are with and at the same time needing to be objective. the media figure is apprehensive and unsure, cleaning his glasses, i.e. wanting to see clearly. The soldiers are grim, tough, alert and also intent on finding out what is going on; but more urgently'. Michael Fitzjames (b. 1948) is an illustrator and painter. He is well known for his block-like illustrations that combine moral and political commentary, presenting unique interpretations of current affairs and world events, combining humour, wit, style and layered cultural references.