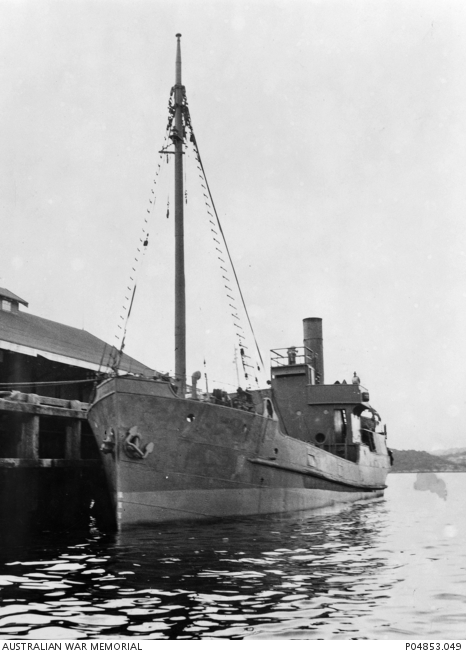 The steam ship Bopple (S-147) of the Small Ships Section, United States Army Services of Supply, Southwest Pacific Area (USA SOS SWPA), docked at an unidentified wharf, probably in Sydney. The Bopple was acquired from S G White & Co., Sydney on 9 September 1942, and served in New Guinea waters. Engineer Albert George Wickens died of malaria on 8 November 1943, aged 69. The Bopple was in Milne Bay in 1944 and Finschhafen in 1945. Initially Australian ships were requisitioned and chartered by the Small Ships Section. Construction of ships for USA SOS SWPA commenced in Australia in 1942. Approximately 3000 vessels were constructed, including freighters, launches, tugs, towboats, lighters, rescue and salvage boats and a large number of barges. An additional 4000 lifeboats and dinghies were built. Around 3000 Australians enlisted in the Small Ships Section during the Second World War. They were not inducted members of the US Army, but were civilians attached to the Army. They were often too young, too old or physically ineligible to serve in the Australian armed forces. (This image is from the collection of Arthur James Carfax-Foster who served with the Small Ships Section from September 1943 until January 1946).