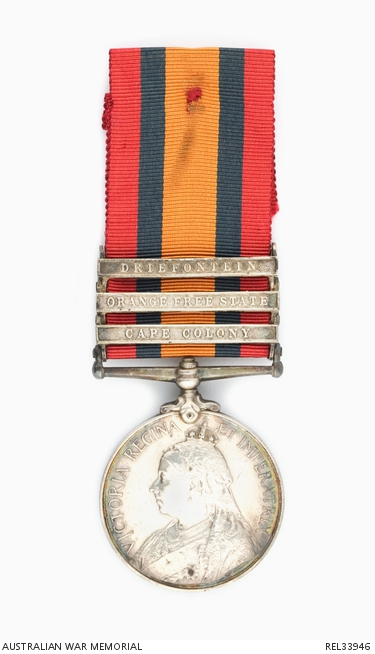 This medal was awarded to Private (Pte) 126 Walter Asquith of Hillgrove, NSW. Pte Asquith embarked from Australia on 17 January 1900 aboard the transport ship Southern Cross to serve with 1 NSW Mounted Rifles. The unit arrived at Cape Town and was involved in actions throughout Orange Free State, Transvaal and the Western Cape, including a charge along the Vet River on 5 May 1900 which resulted in 5000 Boers fleeing the area. Asquith was repatriated home to Australia wounded in July 1900. Hillgrove held a large celebration in honour of his homecoming, including a parade down Bracken Street as he was the first man from his town to return wounded from the conflict. Asquith later went on to become an Inspector in the Police Force.