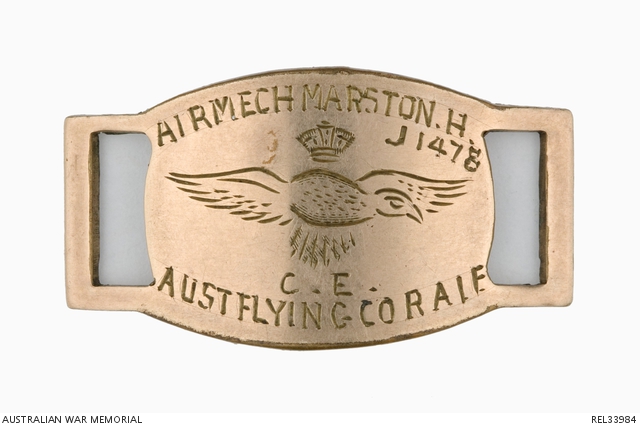 Shaped brass wrist identity disc, with pair of keepers for a leather strap. The disc is engraved 'AIR MECH MARSTON H J 1478' and 'CE / AUST FLYING COR AIF'. In between which is a crudely realised crown and eagle.

Associated with the service of 1478 Aircraft Mechanic Second Class Henry James Marston. Marston was born in Brunswick, Victoria in 1894 and was an instrument fitter on enlistment in the AFC on 24 October 1916. He embarked for overseas service aboard HMAT Shropshire on 11 May 1917, with the rank of air mechanic second class. He disembarked at Plymouth, England, on 19 July and marched into the AFC Training Depot, Wendover. On 22 November Marston proceeded overseas to Bailleul, France where he was taken on strength by 3 Squadron. Marston remained with 3 Squadron until 3 March 1919 when he marched out for England to join 3 Training Brigade, Weymouth for return to Australia. He boarded the transport ship Kaiser-i-Hind on 6 May and disembarked in Melbourne on 16 June where he was discharged.