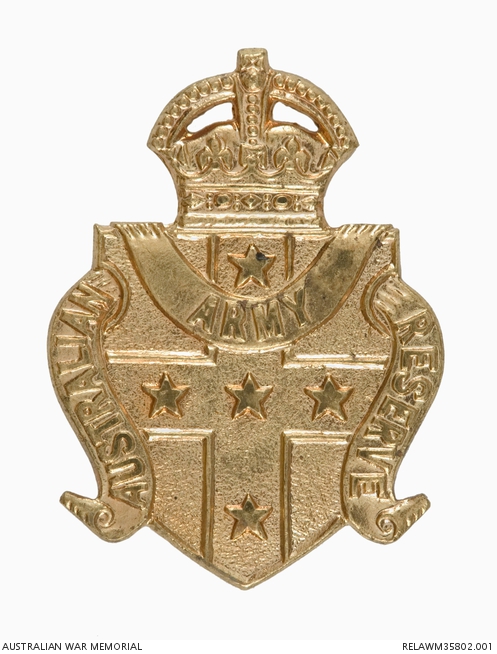 Gilded brass Australian Army Reserve badge. The shield shaped badge is quartered by a cross bearing five raised stars (symbolising the Southern Cross). A banner bearing the words 'AUSTRALIAN ARMY RESERVE' is draped across the sides and top. The whole is surmounted by a voided King's Crown. On the reverse are a pair of horizontal copper lugs for attachment to the lapel, and the makers' marking 'K.G.LUKE MELB'. An impressed serial number '30496' and the raised words 'ISSUED BY THE DEPARTMENT OF DEFENCE' are also present on the reverse of the badge.

Australian Army Reserve badge intended for wear on the lapel of civilian clothing, the badge indicating that the wearer was a member of the Reserve Force. Designed and produced in 1939, 60,000 badges were to be manufactured by KG Luke Pty Ltd of Melbourne, although it is not clear whether this quantity was eventually produced. The outbreak of the Second World War in September 1939 prevented the formal adoption of the proposed 'Army Reserve' scheme, under which 90,000 men were to be enlisted for Militia (or Garrison if aged over 45) service. For this reason, and because most of those who would have been eligible to wear it were now in uniform, the badge does not appear to have been issued. The serial number of this badge; '30496', indicates that it was one of the production batch allocated to Victoria.