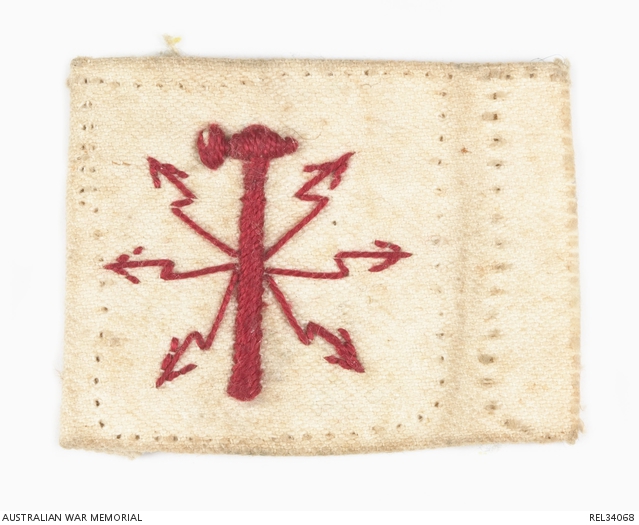 Cloth patch showing a red embroidered axe and six arrows radiating from the centre. The edges of the fabric have been folded to form a square and there are numerous small holes where the edges were once sewn to a uniform sleeve

Badge collected by NX66095 Private Gordon Beard while serving in Palestine during the Second World War. It was given to him by a fellow Australian who had previously served at Tobruk and was distributing part of his large collection of badges as he was unable to continue to transport them all. Beard, born on 17 August 1920 in Manildra, NSW, enlisted on 17 November 1940. He joined 2/5 Australian General Hospital and served in the Middle East from June 1941 to March 1942, in New Guinea from December 1942 to November 1943, and in the Netherland East Indies from January to May 1944, and from March 1945 to January 1946. In June 1945 he transferred to 2/3 Casualty Clearing Station and was posted with them to Balikpapan, as a nursing orderly. Beard was discharged on 22 February 1946.