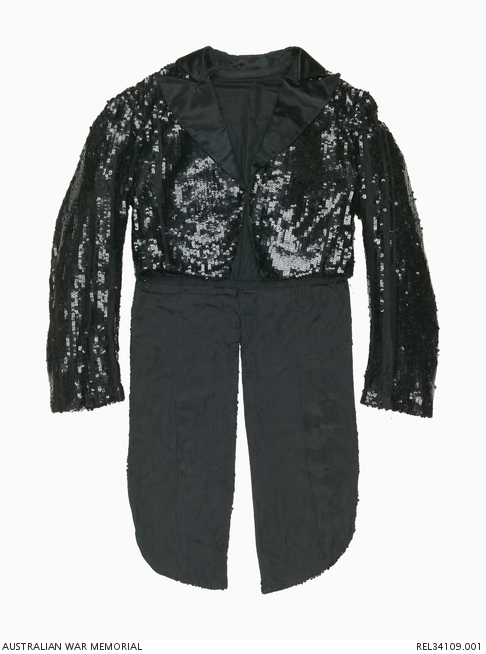 This costume was worn by Shirley Dawson in a tap dance routine called 'The Two Shirleys' (the other 'Shirley' being Shirley Green) in Sydney c 1941-1942. The dance was choreographed by her sister, Lorraine. Miss Lorraine Dawson trained a dance troupe known as 'The Dancing Darlings' which performed at concerts entertaining troops based in Sydney. They also danced at fundraising functions for the war effort. The entire costume for 'The Two Shirleys' comprised a sequinned tailcoat and shorts, satin waistcoat, black painted cane with white head and tip, tap shoes, and a cardboard top hat covered with black satin. The latter has not survived. The dancers had bare legs, often with a 'seam' painted up the back, because wartime rationing restricted the availability of stockings. Norman 'Paddy' Patton, who performed in musical theatre and was also a qualified tailor, designed and made the costumes. Photograph P02718.001 shows the Shirleys dancing their routine.