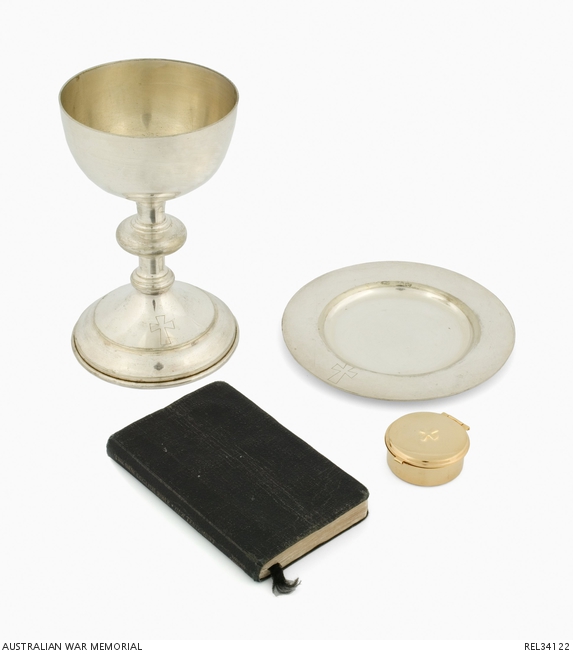 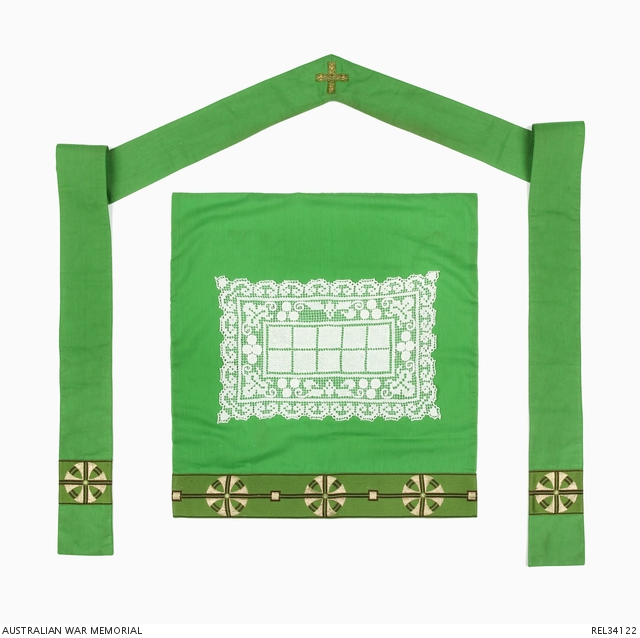 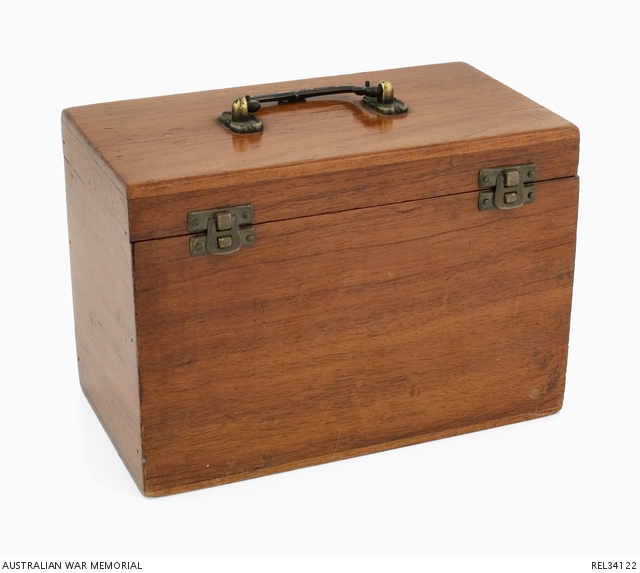 Varnished wooden box with hinged lid, a brass handle and a pair of clasps, with the interior lined in felt. Stored inside the box is a communion set consisting of a green silk altar cloth (570 mm x 540 mm) with embroidered religious decoration along one end; a green silk stole with matching embroidery (2500 mm length x 92 mm width); a small glass bottle with plastic screw top containing red wine; a silver-plated chalice (146 mm height x 90 mm diameter) impressed on base 'EPNS'; a silver-plated paten (or plate), also impressed on base 'EPNS'; a small, round gold plated host box with sprung lid ('Made in China' sticker on base; 17 mm height x 45 mm diameter); a crotcheted chalice cover (365 mm x 240 mm); and a small New Testament published by Oxford University Press in 1961, with black leather cover.

Communion set used by 1200730 Chaplain Lester (Les) Thompson, 6 Battalion, The Royal Australian Regiment (6 RAR) whilst serving in Vietnam from 11 June to 11 December 1966. Thompson, who was born 21 December 1928, states: 'As a young lad I enlisted in the British Commonwealth Occupation Force ... I was a digger in 67 Battalion, located in the Hiroshima and upper hill country searching ammunition tunnels. In those days I never thought of Church but as an Anglican I was most impressed with the RC Padre who seemed to appear whenever we were on the move.' Thompson told Les McAuley (in 'The Battle of Long Tan', p 8) that he had put his age up from 16 to 19 in order to enlist. He returned to Australia and later became a Christian in 1956 'at the age of 28' and soon after joined the clergy. He was ordained in January 1963, and was given this Communion Set by his mother to mark the occasion. When serving at Grafton Cathedral in 1964, a parishioner made the box in which the kit is stored. McAuley relates that Thompson was asked to join the Army Chaplain's Department in 1965 and 'was pleased to find on arrival in 6RAR that he knew a few officers and Warrant Offices from his own days as a digger'. Once at Nui Dat, Thompson usually carried the Communion set in an old Second World War knapsack - see AWM image CUN/66/0471/VN where Thompson is resting his elbow on the set. Chaplain Thompson was with 6RAR at the Nui Dat Base on 18 August 1966 during D Company's action at Long Tan and offered to travel with the A Company relief force to tend the wounded Australians on the battlefield. His offer was rejected by Lieutenant Colonel Townsend who was sure the APCs would bring the wounded back to the Task Force Headquarters. Ultimately the wounded were directly evacuated by Helicopter to 35 American Casavac Hospital at Vung Tau. Chaplain Thompson toured the battlefield the next morning and found 'dead bodies everywhere. As you jumped off the chopper, they were there. ... I was glad I was the Chaplain, I was sorry I was there. I wouldn't have wanted to be anywhere else, but I wished I was a thousand miles away.' He flew on by helicopter the next morning to visit the Australian wounded in hospital, 'then went back to write to the families of all the casualties' (McAuley p 143). The Reverend Thompson continued to use this set for a number of years after and it appears that the host box is a relatively new replacement.