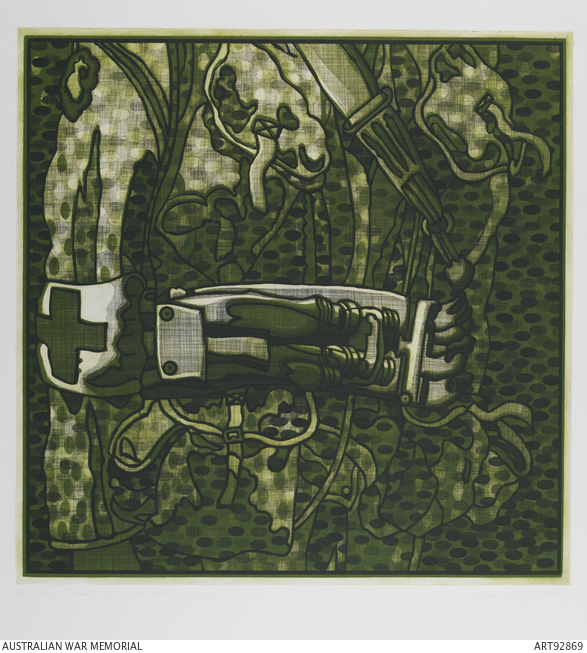 Depicts a close up view of the chest of a US medic in Iraq, wearing an arm band with a cross, straps and a pack across his chest, overlaid with camouflage fabric patterns. The viewer is close to the subject's torso, heightening the sense of his vulnerability; he is not portrayed as a hero; without a face he is an almost anonymous participant in the war in Iraq. In 2001, the artist Ray Arnold began a series of works titled 'Body Armour'. Using disassembled armour of the French King Henri IV (1589-1610) he explored the idea of embellished metal protecting and enclosing the body and the role of Henri as a heroic soldier and commander. After the September 11 attacks in New York this series of artworks evolved to explore the parallels between the mobilisation of soldiers for the US led coalition war in Afghanistan and Iraq, the Bayeux tapestry (and historical wars) and the soldiers of the Second World War D-Day landings. The artist wrote of this work ;' Concepts of woven surfaces and soldiers' 'kits' are employed to construct images about protection...Australian soldiers are deployed in Iraq as I write...[they] are still in danger as they were on the Somme...the prints are symbols of 'wishful thinking' in most respects but none the less remain tokens of protection for them...'.